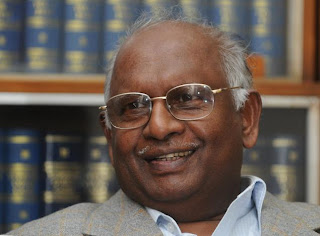 Yesterday, the Supreme Court prohibited tests like narco-analysis and 'brain mapping' from being performed on unwilling suspects. The three-judge bench ruled the tests are "cruel, inhuman and degrading" and contravene peoples' right not to incriminate themselves. I've written before about voodoo technologies being passed off as science, so I'm really glad the court has finally put an end to that dangerous nonsense.
Now the police might actually have to try and find evidence, like, you know, fingerprints, DNA matches, bank transfers, the kind of thing that holds up in court if you do your homework. Unfortunately, it's more likely they'll simply cook up stuff, as they tried to do in the case of the 26/11 co-accused Fahim Ansari and Sabauddin Ahmed. To the cops' dismay, the crisp map they produced from a dead terrorist's bloodied pocket weeks after the attacks did not pass muster with the judge.
Chief Justice Balakrishnan, who was on the bench which made the narco ruling, has a couple of other important matters to sort out before he clears his desk on May 11. Tomorrow at 10.30am, he will pronounce his verdict on the Ambani versus Ambani gas dispute. I've written about that case as well, expressing my support for the younger Ambani in the matter. I've put (some of) my money where my mouth is, taking a punt on the stock of Reliance Natural Resources Ltd., which is bound to skyrocket if the court rules in Anil Ambani's favour. It's not often that you get to bet on justice (or what you believe is justice) being done.

UPDATE: Friday, May 7: The supreme Court ruled in a split verdict in favour of Reliance Industries Limited against Reliance Natural Resources Limited. Essentially, the majority opinion appears to give carte blanche to the government to change contracts as it wishes, when it wishes.
The issue is complicated, but as far as I can tell, it is akin to this example: The government owns a lot of land. It leases a plot to person A. Person A enters into a contract with person B re-leasing the plot for 10 rupees a year. The price of land goes up dramatically. Now person A approaches a friend in the government and says he wants more rent for the plot. The government steps in and claims that it does not like the price of 10 rupees a year, and that B must pay A 20 rupees a year, in order not to cause a loss to the owner of the plot. The case goes to court, and is decided in favour of the government and A.

The message to international as well as domestic investors is clear: do not assume that any contracts you sign in relation to national resources like oil and natural gas hold any value. The government can change policy at a later date and apply it with retrospective effect to the agreement you signed.

This is very bad news for the country. As for my personal bet, I assumed the RNRL stock would plummet if an unfavourable judgment came out, but it held up surprisingly well for a few minutes before beginning to fall, and even then it only fell about 8% in the first half hour. I managed to get out with a tiny profit, which is astonishing. I woke up believing that, should the case be decided in RIL's favour, I'd be out of pocket for half my investment.

FURTHER UPDATE: The reason the RNRL stock didn't buckle is that the judgment has a fudge embedded in it. It takes congnizance of the MOU between the Ambani brothers, and asks their companies to renegotiate the contract in line with the MOU. I have no clue what this means, but I guess some, who might know better, feel there's still some value in the RNRL stock.
Posted by Girish Shahane Girish Shahane at 7:53 PM