Having failed to produce a post each day as I'd promised, and with the London trip already a couple of weeks behind me, I've decided to wrap the thing up with a single post consisting of jottings about different exhibitions. Most are still on view as I write, meaning if you're headed for England around now, you can catch them live.

Damien Hirst: After the pasting he's got from critics, it seems appropriate that black and blue are the predominant colours in Hirst's show. Its title, No Love Lost: The Blue Paintings also sounds prescient. 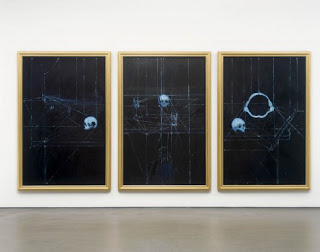 Most of the twenty-five canvases were produced for the billionaire Ukrainian collector Victor Pinchuk between 2006 and 2008, and are being displayed until the end of January 2010 at the Wallace Collection, a museum in central London best known for 17th and 18th century paintings and objets d'art. Hirst has painted every image himself, eschewing his usual practice of outsourcing that side of art creation to employees. The setting inside a grand museum, the reference to Picasso in the title and to Francis Bacon in the imagery, point at hubristic ambition almost impossible to live up to. Outside that context, and the rumoured 50 million dollars paid for the pictures, I liked the work, particularly the two triptychs, of which one, titled The Meek Shall Inherit the Earth is pictured above. The moody blue-black brought to mind a poem by D.H. Lawrence called Bavarian Gentians.

I hadn't been to the Wallace Collection before, and found it an exceptional group of artefacts, the only drawback being its concentration on the 18th century, which in my opinion is a low point in the history of European painting. In delivering lectures summarising the history of art, I'm flummoxed when, after considering Leonardo, Michelangelo, Raphael and Titian; and then 17th century masters like Caravaggio, Rembrandt and Velazquez, I arrive at Watteau and Boucher. I skip quickly past them and neoclassical artists such as David, to find relief in the 19th century, in Gericault, Delacroix and Turner.

The Collection also contains a substantial armoury, which includes Tipu Sultan's sword. But owning Tipu's sword is like owning Sachin Tendulkar's bat. There are so many of them. Vijay Mallya bought one a few years ago, and another was on display at the Victoria and Albert Museum, as part of:

Maharaja: The Splendour of India's Royal Courts. The show is high on atmosphere, but low on spectacular or unusual display items. Barely worth the ticket price for anybody familiar with the V&A's collection and those of major British and Indian museums.

Anish Kapoor at Lisson Gallery: A number of shiny pieces crying out to be bought. I saw this show on my first day in London, and was rather irritated by its overt commercialness. After catching the survey at the Royal Academy, I felt more generously towards the Lisson works. Kapoor employs a couple of dozen workers in his studio, and large projects like Svayambh probably don't provide him substantial margins. The man has to make money somewhere, and I'm sure his admirers are eager to acquire easy-to-display items.

N S Harsha at Victoria Miro: Harsha did the sensible thing, showing his new, somewhat expressionist explorations at Sakshi in Bombay, and sticking with the tried and tested -- delicately brushed images using repeated motifs -- for his London exhibition. He created, also, a fine installation on the upper level, though it was overshadowed by Grayson Perry's giant tapestry on the top floor.

Rina Bannerjee and Raqib Shaw at Thomas Gibson Fine Art: The two make a good pairing, since both are interested in decoration. Shaw, in my opinion, really gets it, pushing ornateness to its limits without apology, and combining it with violent, morbid imagery. 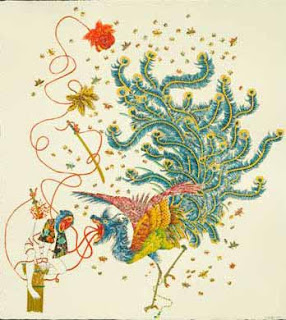 Bannerjee, meanwhile, muddies the waters, uncertain of how critical she ought to be about the decorative values she employs. A strong set of paintings nevertheless. 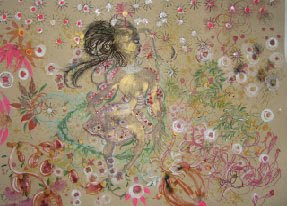 RAQS Media Collective at Tate Britain: This group came to the art world as Amar Kanwar did: through the intervention of Okwui Enwezor, who selected RAQS for Documenta 2002. They produce video and web based pieces that often incorporate historical or other documentary material. The three, Monica Narula, Jeebesh Bagchi and Shuddhabrata Sengupta, are super-intelligent, but I have always found their work visually uninvolving and their texts pretentious. This was certainly true of The Surface of Each Day is a Different Planet (the title itself gives an idea of the preciousness that puts me off) at Tate Britain. I don't have the voice-over from this video to provide as an example of what I mean by pretentious, but here's a randomly selected extract from the texts on their website:
"First, let a map be drawn. Let a cadastral reckoning be inked of who owns what, who owes what to whom. Let empty lots yield. Let letters and numbers do the talking. Let the land be silent.
Who has ever heard the land speak?"
They are fond of using immense rhetorical questions such as, "Who has ever heard the land speak?"
RAQS also featured at Frieze with a sculptural work, a clock containing words instead of numbers, words like epiphany, anxiety, duty, guilt, indifference, and so on. Again, pretentious is the first word that sprang to mind. 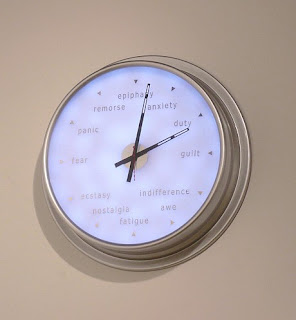 But RAQS have featured at some of the most prestigious exhibitions and museums in the world, so maybe there's something in their output that I'm missing.
At Tate Britain, they were provided a prominent room right next to:

Turner and the Masters: The show juxtaposes works by Titian, Rembrandt, Canaletto and others with canvases by Turner. Plenty of seriously good stuff, but my biggest take-away from the show was the ineptness of Turner when it comes to faces. He's Britain's greatest artist, no doubt, matchless when it comes to atmospheric landscapes, but he produced few, if any, memorable portraits. 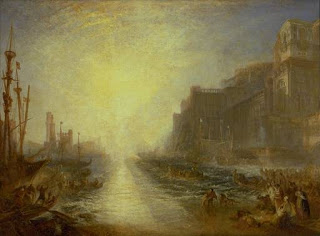 The show demonstrates that the paintings which inspired Turner often contained really interesting countenances, but his own versions relegated these to tertiary status. Even when he did give such figures prominence, he usually did a far better job with the background.
Posted by Girish Shahane Girish Shahane at 10:51 AM

I think you're way off base about Hirst. Those paintings were hack work so bad it casts a stinky odour over everything he's done.

Also you surely cant be talking about Turner's remarkable series of self portraits which are up there with Rembrandt's.

I'll stick to my viewpoint that Hirst's paintings are good, though not masterpieces. There's a vase of flowers that explode into butterflies which I thought was exceptional, apart from the triptychs. The majority clearly disagrees, that's fine by me.
As far as Turner's self-portraits being on par with Rembrandt is concerned, what can I say? I strongly disagree.

I saw the Turner exhibition and remember posting on Facebook that "my admiration for Rembrandt grew". Two things struck me at this exhibition ( which really pulled out some great stuff) that Turner was an intensely competitive artist and secondly 80% of the time I liked the painting his was being compared to better.

Missed the Hirst exhibition but love the Wallace Collection and wander in there frequently.

At Inniva, Nations was installed differently from it's previous two outings and thought it was v successful here, the compaction increased the impact.

it seems that your london tour was pretty good.

Yes, Manish, it was the first trip I've taken where contemporary art was the main focus, and there was more than enough to keep me occupied. Haven't even mentioned Anselm Kiefer at White Cube, Pop Life at the Tate Modern, the Turner Prize nominees and a number of other shows.

Yes,long back i had seen Anselm Kiefer's work on website,but as u have seen orgianl work,that must be a great experience,i feel that he has special talent.
best,
manish nai.