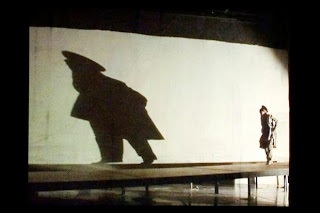 The South African artist William Kentridge is showing at Volte gallery in Colaba. Anybody in Bombay between now and March 20 should definitely put the exhibition on their to-do list. Here's a piece by me about the artist and the show, published last weekend in Mint:
Posted by Girish Shahane Girish Shahane at 7:01 PM 1 comments

I'm back home after a hectic time in Delhi, and here's my take on the recently concluded India Art Fair.
The 2013 edition of the Fair was a moment of clarity, the year when Indian galleries got real about the purpose of art fairs. That purpose is simple: to sell art, and build new contacts that will generate sales in the future. For some reason, a number of galleries had shied away from this goal in the past, catering instead to the tastes of insiders like myself. So it was last year, when I found a lot of interesting art at the fair, but could see the ticket buying public bemused or turned off by what was on offer. I wrote in the Business Standard at the time: "With the India Art Fair trying to build an international brand, those who come have relatively little easily-accessible, decorative stuff to view, raising the question of whether the Fair will manage to strike a balance between global tastes and local mass appeal."
In a way, that question was settled by international galleries themselves. The top galleries that had rented booths at last year's fair -- White Cube, Hauser & Wirth, Lisson -- found Indian regulations too stringent and the market underdeveloped, and chose not to return. This left open the door for the likes of  Daniel Besseiche, which had, among its offerings, paintings by the Dhaka-born, Paris-based Ahmed Shahabuddin. That's the kind of art lay Indian viewers love. 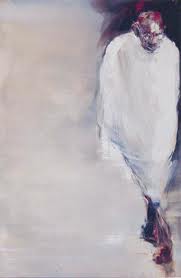 A broadcast journalist asked me to elaborate upon my statement that the art this year was more accessible. I explained that uninitiated viewers enjoy works with an identifiable subject, bright colours, and visible skill. They are put off by conceptual pieces that require an understanding of art history and contain no obviously dextrous use of form. This year's art fair had plenty of accessible pieces and relatively small doses of conceptual work.
On the evening of the VIP preview, I encountered my friend the architect Ashiesh Shah returning to Le Meridien hotel, exhausted but satisfied. He had done the rounds of the fair with three different clients, seeking work to place in upcoming projects. He said the clients had been very happy with the selection available. What had been achieved in an hour or two here would have taken at least a day if it meant visiting individual galleries in Delhi or Bombay.
The accent on accessibility meant that the fair contained fewer items of interest for me, though there were a number of bright spots, such as the 90 year-old K G Subramanyan's excellent solo booth for Sakshi gallery. I don't have a problem with the paucity of top-quality art. Big art fairs spur the creation of a number of satellite events, and it is those -- shows in museums and alternative spaces -- that provide excitement to specialists. The best show this year was at the Kiran Nadar Museum of Art in Saket; a beautifully-mounted retrospective of Nasreen Mohamedi curated by Roobina Karode and designed by Mark Prime. Alongside it, though put somewhat in the shade by the superlative Nasreen exhibition, was a fine display of seven contemporary women artists.
Apart from this standout exhibition, there were interesting shows in KNMA's Noida space; at the British Council; at IGNCA (Homelands, curated by Latika Gupta from the British Council collection); at the National Gallery of Modern Art (The Skoda Prize Show, which I was involved in organising); at the Khoj Artists' workshop, which opened its newly-designed building in Khirkee Extension; and at Devi Art Foundation (DAF), where the closing party was held. The Khoj and Devi events were insiders' displays par excellence: the latter didn't even have labels to guide viewers on which work was by which artist. Walking around the DAF galleries (which I know pretty well since I curated a show there back in 2011), I felt at times that I'd rather be at the India Art Fair staring at a Shahabuddin canvas. Which is the equivalent of feeling, in the middle of a film by Jean-Marie Straub, that I'd rather be watching Salman Khan (though I can't recall ever having felt I'd rather be watching Salman Khan).
At its extreme, in the last and smallest of the fair's three pavilions, this year's India Art Fair resembled Bombay's India Art Festival, which attracts lesser-known dealers. Cymroza Art Gallery had a wall-to-wall and floor-to-ceiling grid of relatively cheap canvases, and they were doing excellent business.  In a way this turn isn't surprising, since Will Ramsay, who, along with Sandy Angus, bought a stake in the India Art Fair last year, is associated with London's famous Affordable Art Fair. However, there's a lot of snobbery involved in these displays: galleries are very concerned about who else is showing, and what their booths look like. The India Art Fair can't afford to allow too many Cymroza-style booths, no matter how popular, any more than an upscale mall can place a Levi's store next to Prada and Burberry.
The gallerists I spoke to were, on the whole, a far happier lot than last year. Perhaps it's a sign that the economy as a whole is sailing out of the doldrums. Viewers who had shelled out 200 rupees (or was it 300?) as an entrance fee, seemed content as well. And festival director Neha Kirpal must be super-pleased to have finally snagged a headline sponsor in Yes Bank.
A final evaluation. Win for viewers: check; win for buyers: check; win for exhibitors: check; win for organisers: check. Win for art lovers: check, if one includes satellite events. All in all, the most successful art fair so far. My main objection was the price of the food in the VIP lounge. 350 rupees for an ordinary cup of coffee: daylight robbery.