Did you check the dictionary?

I just discovered there's a gallery in Gurgaon named Art Farrago. The gallery seems to focus a fair amount on selling through its website. Images of the gallery's stock on the site suggest the name's pretty appropriate.

Long queues before each screening the the Mumbai Film Festival were taken as evidence of the event’s success. The daily publication brought out by MFF boasted about those queues. It just goes to show how warped our idea of success is. A truly successful (by which I mean, among other things, well organised) festival would have large audiences but not long queues. That would indicate the organisers had arranged screenings of individual films based on a good estimate of their popularity. Lars von Trier’s Melancholia would get four screenings at the main venue, being played simultaneously on two screens twice over.

Instead the film got just two screenings. Both were originally scheduled to start at around 8pm, but one was pushed back to 9.45pm. This meant that the 8 pm screening had two halls worth of delegates waiting in line. One view of this would be: Wow, how eager the Bombay film crowd is, queuing up for hours before Melancholia’s screening, the festival’s a true film buff’s paradise. My view was: What a shambles, preventing people from seeing movies they’re keen to catch because they have to wait in line for hours to have a chance of getting a seat for films they’re even more eager to view.

Actually, less than 10% of screenings were actually full. But even one show where people are turned away creates a ripple effect, the equivalent of hoarding during food shortages which lead to massive price spikes. So, there were people in line two hours before Nani Moretti’s Habemus Papam (We Have A Pope), although the hall was half empty in the end.

The audience for Habemus Papam skewed distinctly to the over thirty-five crowd; I suspect most had, like myself, discovered Moretti when Dear Diary was screened at an IFFI many, many years ago. The youngsters preferred a South Korean gangster movie being screened at the same time. 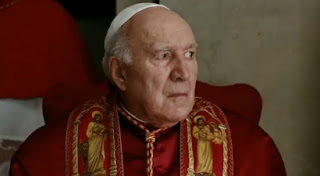 Unfortunately, Habemus Papam is no Dear Diary. The idea of a Pope with stage fright is a good one, but one-trick feature films tend to get tedious beyond a point. Habemus Papam doesn’t lead anywhere interesting, though it keeps the audience amused.

Another old-timer, Chantal Akerman, was in even worse form than Moretti. Akerman’s Almayer’s Folly is a dreadful adaptation of Joseph Conrad’s first novel of the same name. Why the director thought a nineteenth century tale of Europeans seeking gold in the jungles of Borneo could be adapted to a contemporary context is beyond me. I mean, are modern gold mines found by individuals trekking through tropical rain forest with maps as their only guide? To make matters worse, the main character Almayer is a pathetic loser, his daughter is cold and unfriendly, and their relationship, which is supposed to hold the film together, never comes alive in any form. The only good thing about Akerman’s Folly is its visual quality: elaborate takes in urban spaces, jungles and the seashore that one can stare at for two hours without getting bored.

Not all veterans came up short like Moretti and Akerman. Wim Wenders’ Pina, a 3-D documentary about the dancer and choreographer Pina Bausch (who died soon after filming began) is a pathbreaking piece of movie-making. 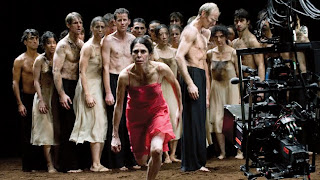 For the first time in history, performance does not die in the course of being transferred to screen. The technology needs refinement, of course: characters still appear a bit like marionettes on occasion, and buildings like doll’s houses. But 3-D allows us to experience dance in ways that are impossible for an audience in a theatre to do, while retaining the crucial feeling of liveliness and presence.

Another film I liked was Julia Murat’s Historias Que So Existem Quando Lembradas (which means, ‘Stories that only exist when remembered’). 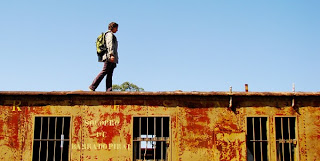 It’s about a Brazilian ghost town populated by old people, who go through a daily routine that is so set it takes on the appearance of ritual. The main character, a woman named Madalena, starts each day by baking bread. She then takes it over to a shop, shares a coffee with the shop-owner, attends church, lunches with the priest and congregation, sits by her husband’s grave, and writes a letter to him after returning home. This set of actions plays out four or five times in the film, but Murat’s exceptional framing is varied enough to forestall any monotony. The ghost town is disturbed by the appearance of a young photographer, who asks to stay with Madalena, and begins questioning the dogmas on which Madalena and the townspeople base their lives. Though the ending of Historias is unsatisfying, the film is beautifully shot and paced, and enlivened by fine performances.

The Universe is Expanding

The Nobel Prize for Physics this year has been awarded to three researchers who showed that the universe is expanding at an increasing pace. Physicists don't yet know how this could be happening; they've had to dream up a massive amount of hypothetical invisible matter to get their equations right.
As a boy, I was pretty interested in astronomy. I remember reading about quasars that were 10 billion light years away and thinking, "Well, why should quasars only be found at the fringes of the universe? What's so special about the edge, except that the light reaching us from there is coming from the farthest back in time? If a chap stood on one of those quasars and looked toward us right this second, maybe he'd see a quasar too. Maybe, the universe was full of quasars ten billion years ago."
Well, apparently it was, more or less.
Before I got to the quasars bit, I learned the universe was expanding. I wasn't a morose type as a kid. The knowledge that the universe was expanding, and the stars and planets would probably keep drifting farther apart and grow ever colder till all communication and all life ceased, was about the only thing that depressed me around the age of ten. When I saw Annie Hall years later, I realised Alvy Singer had felt the same way back during World War II.

Unlike Alvy, though, I stopped doing homework a while before I read about the Big Bang theory.
Posted by Girish Shahane Girish Shahane at 10:01 AM 5 comments