Salman and Chingis Khan and John (not Khan)

Salman Khan is apparently preparing to play the Mongol chief Chingis Khan (or Genghis Khan, or Changaiz Khan, spell it which way you will). This is what Salman looks like: 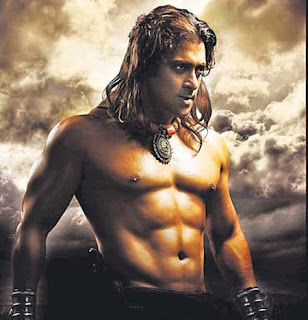 At least, this is what he looks like after a hair transplant, hair extensions and some Photoshop work.
We don't know what Chingis-Genghis-Changaiz looked like, there are no contemporary images of him. But from portraits painted a few years after his death, we can accept he looked something like this: 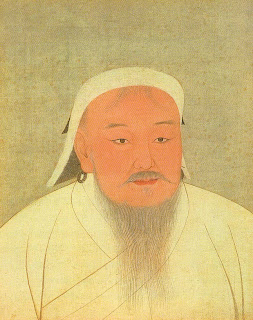 Now you might think Salman doesn't look much like the guy to whom he owes his surname. But then, how much does this actor resemble Chingis-Genghis-Changaiz, who did not even share a surname with the emperor? 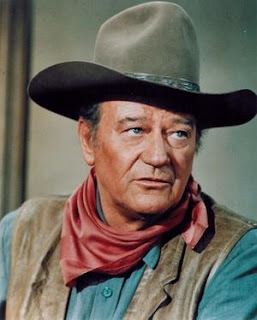 John Wayne was cast as Chingis (sick of name extensions, I'm dropping Genghis-Changaiz) in a film titled The Conqueror, produced by Howard Hughes, who saw it as an 'Eastern Western'. The Conqueror, released in 1956, has gone down in history for two reasons. First, it is considered one of the worst cases of miscasting in the history of Hollywood. 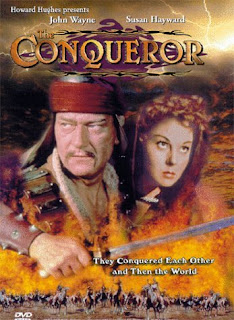 Second, the exteriors were shot in Utah, downwind from a US nuclear test site in Nevada. Of the 220 crew members, 91 developed cancer over the next two decades, about three times the proportion of the average American population.

Weirdly enough, Chingis Khan has been, at one point or another, considered Indian as well as Caucasian. The Indian bit came early on. Europeans didn't know much about this country back in the 13th century, but they had a vague understanding that St.Thomas had converted a few heathens here. When Chingis first came to their notice, it was as a warrior kicking the butts of Muslim kings. Roman Catholics, who'd waged long wars for control of the Holy Land, took this as a sign that a Christian priest-king they called Prester John was riding out from the east to retake Jerusalem. They applauded as the Mongols overran West Asian kingdoms, grew a little apprehensive when Russia and East Europe were attacked, and finally concluded: "These guys aren't Christians, they aren't Indians, they're coming to get us, and we're screwed." Luckily for them, the Mongol invasion of Europe was aborted at the gates of Vienna.

As for Chingis's European connections, that's a modern tale, but one no less peculiar. Hitler, you may have heard, was a fan of Chingis Khan. Genocidal rulers being a relatively small and select group, this is not surprising. But fitting Chingis into the Aryan pantheon was tricky. The problem was solved by Heinrich Himmler, who decided that Chingis was in fact descended from people who had fled the island of Atlantis before it sank, and was, therefore, as blue eyed as John Wayne.

As a sidelight, the Mongol invasion of Europe explains why children with Down syndrome used to be called Mongoloid. You may think it was only because of the epicanthic fold of the eyelid, but there was more to it than that. Scientists believed that Down Syndrome sufferers represented genetic atavism (from the Latin at-avus, or like-grandfather); they expressed traits suppressed for centuries. Mongols had raped or otherwise slept with European women during the 13th century invasion, and those traits within Europe's genetic pool occasionally burst to the surface. Children with Down Syndrome were like normal Mongol children, and the impairment of cognitive ability associated with the condition was explained by the fact that Mongols were not as bright as whites. A British doctor, F G Crookshank, published a book in 1924 titled The Mongol in our Midst, which explained that since most Mongols were imbeciles, it was to be expected that Mongols who atavistically appeared in Europe should share that imbecility. The book was generally well reviewed.

As it happens, the nations of North and East Asia, Mongolia included, score exceptionally well in IQ tests. From the information available today, it appears that average IQs in these nations (China, Mongolia, Korea and Japan) are 2 to 5 points higher than those measured in white-majority countries.
Posted by Girish Shahane Girish Shahane at 8:05 PM

Actually, I think John Wayne in the poster looks more like Chingis in the portrait than Salman Khan in the poster. For whatever that's worth. But I'm sure it was a pretty atrocious movie which makes it even sadder that all those people were exposed to radiation. Not that even a great movie would have made up for that.

It takes a lot of nerve to call the people who came within a stone's throw of taking over your entire civilization 'mentally inferior', doesn't it? But then, people will believe anything, especially if it casts them in a more favorable light.

That John Wayne film is funnier than almost all the comedies he made with John Ford.

Seana, you're right about Wayne, I guess the make-up guys will give Salman's eyes and brows a tweak during the shoot.
Adrian, Salman Khan has actually been in a couple of good comedies, so I can't even hope his Mongol adventure will be his funniest film.

Thats awesome info for a Salman Khan's film, but the pity is he doesn't understand quality film making.I don't think that this is a mongol adventure, I have no doubt that he is trying to live up his own fantasies after watching movies like " Troy " and " Gladiator ", and Veer looks like a " love story " designed on those lines at least on the looks front. I don't think ancient Indian warriors wore that sort of costume.

He did a film called " Chandramukhi " ( he gave the story too!!) which I had the misfortune of having had to watch it without a choice as I was a kid in a defence hostel. This was clearly " inspired " by BIG by Tom Hanks, So my expectations on this film are close to zero....

Srikanth, thanks for your note. Actually I wasn't referring to veer, though the publicity still is from that movie. The Chingis project is apparently next on Salman's plate.

I wonder what Salman's IQ is...

You people have got it all wrong! There's a reason why movies like this drive up the sales of alcohol and weed.

The right approach is to consume a little (or lot depending on your ability to handle such films) alcho and whatnot, and Veer just might be the greatest movie ever made... well for those 150-180 mins anyway!

Very interesting stuff about the Mongols. Sallu looks like a combination of SRK's Asoka and a character from Ekta Kapoor's Mahabaharat ( I had the misfortune of seeing bits of an episode and I almost stabbed myself to death with a blunt instrument).
Are we going to see Chingis dancing and singing and prancing around in the rain? This might spur another Mongol invasion (hopefully). On the other hand Hindi movies are VERY popular in Central Asia. Maybe this might transform Sallu into the most popular cultural ambassador since Raj Kapoor (horrors!).

Highly interesting piece .... almost made me get over the shock of seeing Salman Khan in all his pristine 'clothlessness'.