The Problem with Theocracy 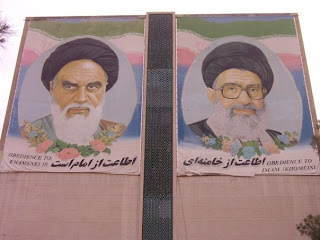 Indians love to call Pakistan a theocratic state, though it is not even close to being one. The only country in the world ruled by a theocracy at the moment is Iran. The argument in favour of theocracy was laid out by Ayatollah Khomeini starting in the late 1960s. Unfortunately for Khomeini, other clerics of the highest rank did not buy the idea that all affairs of state should be monitored and guided by religious scholars. Even today, clerics like Iraq's most senior Shia theologian, Grand Ayatollah Sistani, are known to be opposed to the wholesale takeover by priests of the organs of government.
Khomeini was an old man by the time his Islamic revolution bore fruit, and it became imperative to groom and appoint a successor. He chose Ayatollah Montazeri, not a renowned jurist, but one of the few individuals within Khomeini's inner circle technically qualified for the job. Montazeri, however, began moving steadily leftward after 1979. In Khomeini's last years, his appointed heir came out in support of free political parties and a conciliatory foreign policy while criticising extreme actions such as the fatwa condemning Salman Rushdie to death. Khomeini demoted him and appointed in his place Sayyed Ali Khamenei. Khamenei was not even an Ayatollah, but he possesed the quality that Khomeini was looking for above all: absolute allegiance to Khomeini's ideas. After Khamenei took over as Iran's most powerful man, Montazeri clashed with him over issues like the mistreatment of Iran's Baha'i minority, and was placed under house arrest between 1997 and 2003.
Khomeini had argued that a marja (an Ayatollah qualified to interpret scripture and guide followers) ought to lead Iran. He ended up clearing the way for a non-marja to occupy the highest post in the land. The requisite qualifications were, of course cooked up, and Hojatoleslam Khamenei became Ayatollah Khamenei without producing any scholarly work to deserve the promotion.
For the past twenty years, Khamenei has ruled Iran without ever gaining a substantial following or a place in the hearts of his countrymen. Many of his fellow clerics continue to feel he should never have got the top job in the first place. Now, with the result of Iran's election being contested, the schisms are making themselves evident again. Ayatollah Montazeri has come out against the count, saying nobody in their right mind can believe it was fair. The battle currently being played out is between two factions of insiders, one led by Ayatollah Rafsanjani and Mir Hossein Mousavi, and the other by Khamenei and Ahmadinejad. Khamenei has had two decades to appoint loyalists to top jobs like Iran's twelve member Guardian Council which oversees all legislation. He still holds the better hand, but continuing public protests, which evoke the mass demonstrations that toppled the Shah and ushered in the Islamic revolution, could change that. What insiders on both sides fear most of all is that riots will get out of hand and threaten the foundations of Iran's entire theocratic system.
Thirty years of the Islamic Republic of Iran have proved that priests turn every bit as power-hungry as commoners once they are granted secular authority. Not a surprise for those familiar with history, of course. Iran's been burdened with the restrictions that come with theocracy, without gaining the clean government of high ideals promised by Imam Khomeini.
Posted by Girish Shahane Girish Shahane at 8:46 AM