The new Indian President: A matter of stature

The Congress is currently scrounging for votes from regional parties to ensure its candidate gets elected President without problems. Last time round, after negotiations with the Left, the party settled on Pratibha Patil, who is destined to go down as one of the least distinguished Presidents in India's history. After Ms. Patil, it is clear that moral or intellectual stature are not prerequisites for the post. Let me therefore suggest that physical stature should be a major consideration.
After all, the President's post is a ceremonial one; like British Royalty, Indian Presidents just have to turn up and look good. It's a pity, then, that we have chosen a succession of midgets for the job. Here is President Narayanan: 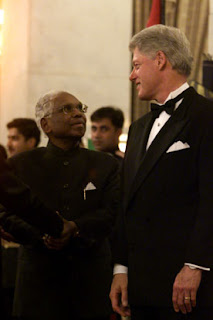 Bill Clinton looks like he might get a crick in the neck from looking down at our man. After Mr Narayanan came Abdul Kalam. 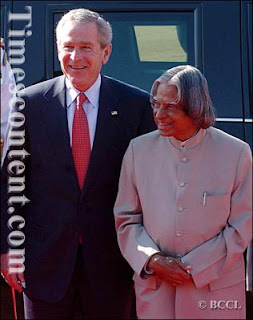 George W Bush isn't as tall as Bill Clinton, but that didn't stop him towering over the pint sized Mr. Kalam (whom Indians like to call Dr. Kalam, though he has no doctorate and has never published a single research paper in his life).
And now we have Ms.Patil: 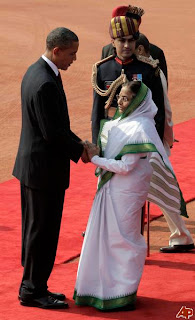 President Obama's father was from Kenya and next to Pratibha Patil he looks like an especially lofty Masai. How's the weather up there, Barack?
So how do the two top candidates being considered by the Congress measure up? Hamid Ansari hasn't been photographed much with foreign dignitaries, but this picture of him standing next to Omar Abdullah inspires little confidence: 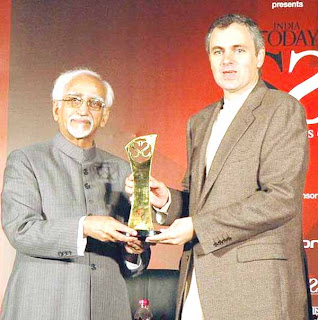 As for Pranab Mukherjee, I think it'll be great for the country if he were made President, mainly because it would remove him from the Finance Ministry, and prevent him from putting in place more ridiculous measures like the retrospective tax he introduced in his last budget. In the stature stakes, though, he is more or less in the Patil league. During his term as External Affairs Minister, it became apparent how vertically challenged he was when he met counterparts like Mr Qureshi from Paksitan: 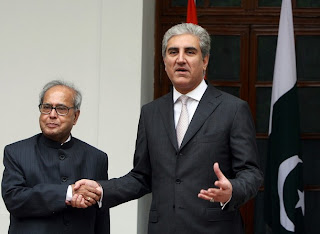 Ms. Rice from the United States: 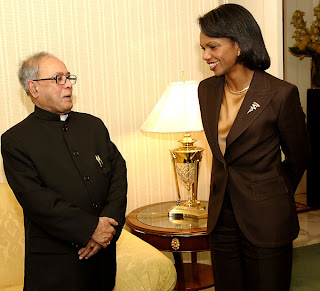 And Mr. Milliband from the United Kingdom: 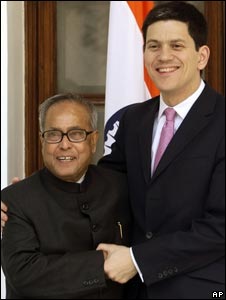 For readers who have not met me, I'd like to clarify that I am short myself, and this post is not inspired by personal prejudice. But since we have a minimum height requirement for the military, why not apply it to the official head of our armed forces as well? There's no evidence that taller people make better soldiers, as the Vietnam war and General Giap make clear. But taller people do make better-looking Presidents, or at least less ridiculous-looking ones.

Update: Chief Ministers Jayalalitha and Nitish Kumar have put forward the name of P A Sangma as their candidate for President. Mr Sangma is the guy on the extreme left in the photograph below.I'm beginning to scent a conspiracy. 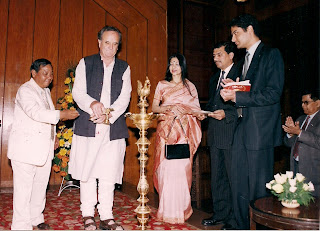 Using these standards, I can only suggest Khali for President.

Heh, he'd probably do pretty well. However, technically, suggesting we shouldn't nominate yet another midget President isn't the equivalent of pushing for a giant.

I would resurrect Narayanan, if it were possible, compared to the names being flogged today, all two and a half feet of him.

I agree about Narayanan, but can't resist telling a joke that some Malayalis dreamt up about him. When he stood at flag hoistings, they'd wonder if he felt tempted to shin up the flagpole. It's a casteist joke, the background being that Narayanan came from a Dalit community who were assigned the role of picking coconuts. But I do find rather funny the idea of a distinguished career diplomat turned President suddenly succumbing to an atavistic urge and start climbing flagpoles as a substitute for coconut trees.

On the lines of 'lesser of the two evils' I suggest 'taller of the two likely contenders'. I have no idea who's taller among Pranab and Ansari, though.