A common morning story. A large Chevrolet is double parked in front of my building, leaving only one lane free for two-way traffic. A Maruti Dzire goes past the Chevy in a hurry, just as a taxi driver backs out of the driveway of the building opposite my home. The taximan, looking out for vehicles coming from his left, doesn’t see the Maruti driving in the right (ie. wrong) lane, and reverses into it. The Maruti is dented, the taxi, an old Premier, unmarked. The Maruti’s driver demands compensation, the taxi driver refuses, suggesting they go to a police station to sort everything out. In India, the person who suffers most in an accident is always a victim, the facts of the case don’t matter. Having seen close-up what happened, I explain to the people gathered below my balcony that the real culprit, the man who had double parked, has driven off. But that doesn’t stop a fight from breaking out.
The driver of the Maruti is Marathi, the taxiwalla from UP. The home state of the men becomes more important than the way the incident played out. A man on a motorcycle taking his young boy to school stops to figure out the language situation, and begins to abuse the taxi driver. Emboldened, the Maruti driver slaps the taxi man, something he’d never do in a one-on-one match up against his tall and well-built antagonist. The cab driver, knowing he’s in the Marathi manoos heartland, does not retaliate. He says, “How will beating me help. I have no money to pay you. Let’s go to the police station”. The man on the motorcycle continues shouting. “Speak in Marathi, motherfucker”, he says to the ‘bhaiyya’, though everybody present understands Hindi perfectly well. His boy shrinks away to the edge of the back seat, on the verge of tears.
The old Shivaji Park civility is not entirely dead. A gentleman in his late fifties intervenes, insisting the shouting and beating stop. A woman calls out from a balcony backing him up. I say again it wasn’t really the taxi driver’s fault. Had there been one or two more aggressive MNS types in the crowd, the safari-clad gentleman would’ve been told to shut up, and the fight would’ve escalated. But the scales happen to be evenly balanced, and the situation clams down. The drivers go off to the police station.
I think of the hundreds of insults that North Indians face in Bombay each day. By now, after years of this treatment, every poor or middle class person from UP and Bihar must feel unwelcome, and sometimes unsafe. The question is: if North Indians stop coming to this city, and if some of those already here leave, will it increase opportunities for Marathis? A Marathi rickshaw owner with cancer doesn’t think so, and his story is instructive. It’s not as if Marathis are actively seeking to drive autos and taxis, and being deprived because of an influx from the north. Protectionist laws and the assault on North Indians have only led to fewer taxis and autos plying, inconveniencing commuters. 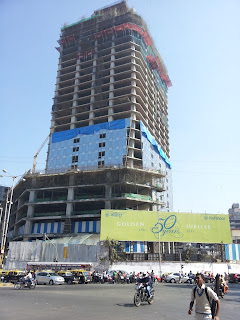 Meanwhile, opposite Shiv Sena Bhavan, the largest towers ever built in Dadar are being sheathed in glass. The complex, now called Kohinoor Square, used to be Kohinoor Mills. The 4.8 acre plot was purchased by Raj Thackeray (who later sold his stake at a fat profit) and Unmesh Joshi (son of Shiv Sena leader Manohar Joshi) in 2005 for 421 crore rupees (over 75 million USD). Nobody knows where Thackeray got that kind of money, but as long as he defines enemies for his followers to target, they won’t ask questions; and they won’t understand that, if this city is in many ways unlivable, it isn’t because of northerners coming here to work hard for a living, but because of builders who’ve corrupted politicians of all parties, and most bureaucrats, and subverted planning, infrastructure augmentation and public housing projects. You won’t hear Raj Thackeray say much against builders; after all, he’s a proud member of that fraternity.
Posted by Girish Shahane Girish Shahane at 1:11 PM

I don't understand as to what these hooligans get so arrogant about? What have they or there clan contributed to any of the good things in Mumbai in the past or in present times!.

i wonder how come its not obvious to everyone that the guardians of marathi asmita are doing nothing for the manoos , what is their track record, do they employ "only" marathi folks on their sites? do they give concessions to marathis when they sell spaces in their buildings? like all politicians the issues they fire are more to keep the janta busy from noticing that they are busy gilting their own future!