Harry Potter and the Deathly Hallows, 1 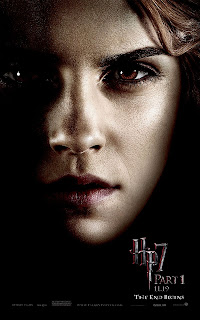 Harry Potter and the Deathly Hallows ended up being as tedious as the first half of the book from which it is adapted. I wish they'd junked most of those interminable scenes in the tent and concentrated entirely on the Horcruxes, basically made it into an action film instead of a tragi-romance of the kind that fourteen year-old girls seem to love. By which I mean HP7:1 is quite close in mood to the Twilight series. Hermione's even begun to look a bit like Bella, all pale and frail.
I liked the opening a lot though. The melancholy hits you hard right at the start, and the music has a lot to do with it. Nine out of ten Hollywood films use the same soupy sound to tug at heartstrings, but I felt the score of the Deathly Hallows had something profound to it. Maybe I'd change my mind on a second viewing, I'm never confident about my musical judgment anyway.
As soon as the first chase gets under way, one realises the director David Yates is on much firmer footing in emotional scenes than slam-bang ones. That was the case in Order of the Phoenix as well. In Half-Blood Prince, Yates chose a classical pace, and I think that resulted in the most successful of the three Harry Potter films he's directed. Perhaps not coincidentally, it's also by far the best of the last three books in the series.
Posted by Girish Shahane Girish Shahane at 8:52 PM

Who was it that said that sentimentality is unearned emotion? Thats what those Hollywood scores seem to me. Unearned inappropriate emotion.

I am relieved however that is the end of the Harry Potter films. Now if we can kill those Narnia movies and anything with Adam Sandler in it I'll be happy.