Last month, two Bombay boys, Keenan Santos and Reuben Fernandes, were killed by a group of youths. It began when girls with Keenan and Reuben were sexually harassed by strangers outside a pub in Amboli. After Santos and Fernandes roughed up the abusers, the men got together a large group to exact revenge.
What seemed to me peculiar about the coverage of the sad incident was the focus on supposedly heartless bystanders. The friends of the slain boys harped on this on every interview they gave. A Mumbai Mirror article, headlined 'People watched quietly as our friends were dying', was typical of the general media response. The Times of India carried this quote from Reuben's brother Benjamin: "On the night of the attack, the street was crowded, but no one came forward to help us. People have become numb. They do not want to get involved . Perhaps they are afraid of the visits they will have to make to court and the police station; perhaps they don't care enough."
Barkha Dutt anchored a predictably obtuse discussion on NDTV, and wrote in the Hindustan Times, "Within minutes the assaulters had knives and swords out and soon the boys were lying collapsed in pools of blood, their insides ripped out as 40 bystanders stared on passively, ignoring all pleas for help. It would not be unfair to say that more than the mob it was urban apathy that killed Keenan and Reuben... the basics have broken down — the sense of community, kinship and humaneness appears to have evaporated. More brutal than the murder is the image of the onlookers who refused to help."
These statements all strike me as foolish, because only idiots would get involved in a fight involving a dozen people with knives and hockey sticks. A mob like that doesn't listen to reason. It is out to maim and kill, and will harm whoever stands in the way. Castigating urban apathy is warranted when someone's left to die at the streetside after an accident, but no such moral lesson should be drawn from the Amboli tragedy.
Why am I writing this weeks after the incident? It's because a news item in today's papers indicates what would probably have happened to anybody getting in the way of the thugs who murdered Keenan and Reuben. In this case, two teenagers fought over a girl. One of them brought in brawlers to beat up, maybe kill, his adversary. A young fruit seller named Sarfaraz Sheikh tried to stop the mob. 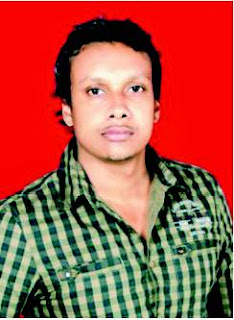 Sarfaraz (mugshot above) was stabbed to death. Two youths named Munish Patil and Mayur Patil, who had come out of a nearby cybercafe, also intervened, and were also stabbed and critically wounded. Maybe they had viewed a programme where panelists went on about how terrible public apathy was, and how citizens ought to intervene promptly in such matters.
Posted by Girish Shahane Girish Shahane at 9:57 AM

Great sensible point against the hysteria about "bystanders' apathy". Perhaps a more prudent response as a bystander would be to observe at a distance so that the perpetrators can be identified later? Though that seems a bit cold and unsympathetic, it must really count for something when the case goes to court if someone kept a cool head through the mayhem and can testify as an eye-witness.
JB

I enjoy your articles, but your last sentence is distasteful.

The 3 guys were trying to save someone and got killed and I don't think passing a sarcastic comment on their death is inappropriate.

JB, thanks. Anonymous, maybe I miswrote that sentence or you misread it; it was sarcastic, but the sarcasm was directed at news programmes, not at the two men who died.

@girish,
Yeah, I understand. Just that the first time one reads it, it appears to be directed towards the two men ( although that wasn't your intention)

What do you think the role of magazine covers - such as the FHM India - do in a street environment like this? It is only after I lived in cities outside India that I realised how guarded I always was on Mumbai streets, and how much I abhor the leers that we live with all the time. But if you look at Bigg Boss and lads magazines, it would seem we live in one the most sexually liberated societies? At least, Pakistan has the decency to be outraged - that is more honest than the hypocrisy of the Indian society.

As it happens, I don't look at Bigg Boss or lads magazines, so can't speak of the role of magazine covers. I do think leering at women was common in India before FHM became available, though.

Girish, Your sentiments are exactly the same as most people. The general public attitude of not falling into any trouble, not getting involved in another's fight, not your business is what mumbai has come to. Each one of the over 50 bystanders may have thought the same thing. If just a few people had the courage to intervene. Fear is what keeps the public from getting involved and people need to let go of that fear. Fear is what the criminal elements depend upon to get away scot free from the scene of the crime.

Imagine, if a few of those over 50 bystanders had the courage to intervene, the crowd of bystanders outnumbered those of the goons. Criminals are cowards, they run at the first sign of any danger to themselves. You don't need to get in the middle of the fight, you can make noise, scream loudly, throw things at the goons. If you are at a scene of a crime/accident, it is your duty to do anything in your capacity to help.. Not a single person came forward to help take Reuben and Keenan to the hospital, not even to halt a rickshaw. This is what public apathy is.. people don't even flinch while watching a person getting murdered and are not bothered to help an injured person, they would rather watch him die. People were standing around watching Priyanka crying for help, and didn't come forward. So would you rather be a part of the crowd watching someone die, can you live with knowing you did nothing at all to help?

I am sure each one of those bystanders would have thought and acted differently if it was happening to themselves, to their own friend, brother, sister.. Keenan and reuben would never have thought twice about helping a stranger getting beaten to death, they would have rushed in without a thought to themselves, I would too.. People need to introspect, what road are you taking, each one of us can make a change to the place we live in. We have to let go of our fears and take courage to stand up for what's right.

No, Benji, you are just repeating the falsehoods perpetrated by the media, and repeating cliches about 'standing up for what is right'. For example, your point that 'not a single person came forward to take Reuben and Keenan to the hospital". Well, Reuben and Keenan weren't alone, they had friends with them, who had run away and were unharmed. What were those friends doing after the fight had ended? Surely they could have halted a rickshaw.
Secondly, a crowd collects once the noise of a fight draws them out. I doubt if fifty people were standing around on the street when the men out for revenge approached Keenan and Reuben. There were fifty people outside at the end of the fight, because they came rushing out of shops and restaurants on hearing the commotion. Having thus come out and watched a fight in progress, how would they be able to judge the context of the fight?
I have witnessed such situations more than once myself. While it's true that fifty bystanders acting in unison would probably force an armed mob to reconsider options, bystanders are rarely present and attentive before a fight commences, and they never act as a unit (this is the case everywhere in the world, not just in India or Bombay). The first individual to try and coordinate a response would immediately become a target himself.
Maybe some day you will confront an angry, armed mob, I hope, on that day, you don't do anything foolhardy. I suspect you will not, because experience is very different from theory.

just saw the post and thought i should reply: The first time i tried to stop a small mob from beating a friend to death, they cracked one on my head and i was unconscious for a few minutes. But thankfully due to this the mob dispersed, and the guy i set out to save took me to the hospital. This was 2 weeks prior to my marriage which i attended with 4 stitches in my scalp. The next time - this was while helping a stranger and his girlfriend who had been rear-ended by a drunken bunch and they set about thrashing the guy. The girl cried out for help; nobody came forward, i remembered what had happened to me the last time and so did not step forward either. But then i saw the boy getting brutally beaten, i looked for one fairly able youngster, and told him this must stop so help me; and stepped forward. As luck would have it as soon as i waded in there were three more guys who came forward and started forcefully separating the drunks. We got the guy out and got him into his car - by the time his girlfriend had moved to the drivers seat - and they escaped.

I wondered why i did that, knowing well the possible outcomes. But then 20 years ago i had made a pledge holding our national flag, that i would protect and defend our country and make her countrymen safe. At that moment all i was thinking was the service need not be at the border, it can be at home too. To put service before self - it is the privilege of a chosen few.

Commander, you are brave and lucky. If that mob had possessed knives and choppers, as the group that killed Keenan and Reuben did, I suspect you'd have ended up unconscious for longer than five minutes.

Hi I think that standing and watching is depraved. It was the crowd closing in on the murder that gave the assailants permission. Heroics may not prevent a tragedy but calling the police, raising an alarm, calling for re-enforcements (like the retired Commander from the previous post did) are necessary actions, things that initiate a heedful, vigilant atmosphere. The crowd surrounding the killers are guilty of abetment as they stood and watched. For their degree of involvement (they were not even bystanders, they came at the behest of the accused, after all) they should have been charged too. This is not a TV show. This is someone's life.