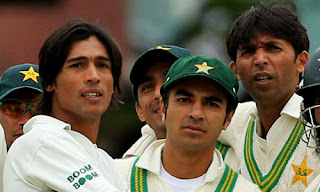 Yesterday, two Pakistani cricketers, Salman Butt and Mohammad Asif, were found guilty by a London court of conspiracy to cheat, and conspiracy to accept corrupt payments. Another cricketer, Mohammad Amir, had already pleaded guilty to the charges.
Discussing the issue last night on NDTV's Left, Right & Centre, the veteran commentator Kishore Bhimani played the race card. He said (starts at 16.18 of the discussion), "Both Mark Waugh and Shane Warne, two great cricketers, they were involved in fixing a match on the 9th of September 1994. This was the Singer Cup in Colombo, you don’t have to take my word for it, this is recorded... But they were mollycoddled so much that it wasn’t even told to the ICC. There seem to be different rules for the English and Australian players, and different rules for the continental players." Earlier in the programme he named Tim May along with Warne and Waugh as one of those guilty of match-fixing. Needless to say, he did not mention a single Indian cricketer among the guilty. Bhimani was media manager during the World Cup, and, like all Indian cricket commentators, knows the side on which his bread is buttered.
What he said about Warne and Waugh, though, is slanderously inaccurate. What the two did was deplorable, but could in no way be described as 'match-fixing'. They took money from a punter and in return for opinions about fairly innocuous stuff like pitch conditions. When asked to alter their play for money, however, both immediately refused. Pakistani cricketers, in contrast, were in the fixing game wholesale. Testimony heard by the Justice Qayyum is utterly damning of Salim Malik (the person accused most frequently in sworn statements of directly offering players money). Wasim Akram and Ejaz Ahmed come off pretty badly too. Inzamam, Saqlain, Waqar, and Mushtaq Ahmed appear involved in shady stuff at least some of the time. A finger is pointed at Saeed Anwar, too, but he appears to have struggled with temptation and gone over to the clean side (represented by Aamir Sohail, Rameez Raja, Rashid Latif and Aaquib Javed).
The Indian team was as embroiled in this jiggery-pokery as the Pakistanis. One of the prime accused in our own match-fixing scandal, Ajay Jadeja, is now contracted by, wait for it, NDTV. Wonder why they didn't ask him to comment on the London verdict?
Jadeja's interview with the CBI back when we had an inquiry of our own makes for interesting reading. Evidence was presented to him that he was in regular contact with bookmakers. He brushed it off, saying he met many people and couldn't remember them all. Some of these people, though, called him dozens, even hundreds of times during matches. The CBI had cellphone records to prove it. One bookie, Uttam Chand, called Jadeja ove 150 times in the course of a single Test Match in 1999. Here's Jadeja's explanation for his frequent chats with this guy: On being asked whether he knew Uttam Chand, a bookie/ punter of Chennai, he stated that he did not know him. On being confronted with Uttam Chand's cell phone printout, which disclosed very frequent telephonic contact between both of them just before or during cricket matches, he stated that he recognised Uttam Chand's cell phone number but knew him as 'Gupta'. He did not know how Uttam Chand got his telephone number. Jadeja stated that Uttam Chand used to ring him up often and tell him that if he did not talk to him, he would run into bad luck and because of superstition, he used to return his call. On being asked whether he knew that Uttam Chand was a bookie, he stated that he had an inkling to that effect due to the nature of conversation Uttam Chand used to have with him. On being asked why he did not discontinue his association with Uttam Chand after that, he said that he could not explain this.

So Jadeja's defence is that he took hundreds of calls from a bookie (and, on rare occasions, made calls to the man himself) out of fear he might face a run of bad luck if he didn't. If you believe him, I'd like to introduce you to a friend of mine, a Nigerian businessman with a Swiss bank account.
Posted by Girish Shahane Girish Shahane at 10:47 AM

While I agree with your general point on Bhimani playing the race card incorrectly, I do feel that folks like Hansie Cronje and even Herschelle Gibbs got away. I don't recollect what, if any, punishment Hansie got outside of losing his place in the SA team (he might have...I am just saying I don't remember and too lazy to look up the internet). Gibbs, on the other hand, played for many years and steadfastly refused to come to India on SA tours to avoid being questioned by the police or risk facing prosecution as there was a case pending against him. I very well remember the howl of debasing comments that were made of India and it's legal system by the SA media. Granted, the media isn't everybody in SA, but the race card is prevalent everywhere.

Which brings me to another point - I am mystified that the 3 Pakistanis agreed to show up in court in London at all. If they had done what Gibbs had done i.e. refuse to show up in London, what would've happened to them? Maybe they might've been convicted in-absentee, but likely wouldn't have ended up in jail. I will say it again - I am perplexed that they showed up and I have serious doubts if the shoe was on the other foot, where say an Aussie cricketer was caught in the exact same situation as these 3 players, but in India, he would return to face trial here.

These are good points, DK; I've also wondered why they bothered turning up in London. I guess there's an extradition treaty involved.
As far as Gibbs goes, the Indian police's refusal to prosecute any Indian players, despite tons of evidence (look at the article on Jadeja and the CBI to which I linked) is a clear sign of bias. Also, the Indian system tends to put people in jail (in extremely unpleasant conditions) for long periods of time without proving anything or even charging them with a crime.
Besides, the evidence against Gibbs is paltry. Consider this: Hansie Cronje offered him a certain amount to get out under 20 in a one-day international. Gibbs, instead, scored a quick half-century. So he didn't do what he agreed to, and received no money. For this misdemeanor, he was threatened with arrest. Meanwhile, Hansie Cronje sais that Azharuddin has *introduced* him to the bookie Mukesh Gupta who made the offer to him which he relayed to Gibbs. So Azhar was obviously neck-deep in this dirty business. But he was not jailed nor hauled up before any court, and is now an MP, which is appropriate, I suppose, since so many of his fellow MPs have committed crimes of similar of greater magnitude.
Again, our fixation on Gibbs and Boje, and our forgiving of Jadeja, Mongia and Azhar, not to mention Kapil Dev, seems biased to me.

Good stuff, Girish Shahane.
I'll try to clarify one point - why did they show up to be tried under British law? They did because they didn't have a choice. When they were questioned in the UK last year, they were allowed to go back to Pakistan on a guarantee by the Pakistan government that they'd be back to stand trial in England. Else they wouldn't have been allowed to leave England at all.

Thanks for clarifying that, Anon, makes sense now.

This Jadeja always had somnething suspicious about him. Just like his mother-in-law, Jaya Jaitley, who was scamming with George Fernandes. Remember Tehelka? As for NDTV, one just has to recall the Radia tapes.

Girish - I completely agree that we were biased and let Indian players go free. It was very heartbreaking to first hear about the likes of Azhar, Jadeja, Mongia. Prabhakar and even Kapil Dev involved in this and then cruelly insulting that no punishment worth it's dime was meted out. Looking back now though no one was punished when this scourge first surfaced a decade ago - be it Indian, Pakistani or S. African or any other. Every single one of them was let go. Every country was protecting it's own herd at that time. So only pointing our our bias doesn't cut much ice.

Though this incidence is a sad one, I am glad this time the perpetrators are now facing jail time. I hope more skeletons fall out of the closet.

Finally, I will reserve my opinion that if today an English player is caught in India, he wouldn't return to face trial. The point about our legal system being problematic though true, is not an excuse for the accused to not return at all and face the courts. No one is above the law eh? If the alleged crime is committed here, the suspect is caught here, then the prosecution has to happen here as well. The Indian courts have processed foreign nationals in the past and I remember reading a report a few years ago (maybe from the UN?...I will post a link if I can find it online) that did give our legal system a decent grade as far as handling foreign nationals was concerned.

Anon - Thanks for the clarification. That makes sense.

There should've been more punishment meted out for sure, deepak. But in the spirit of truth and reconciliation, I feel at least we got from Hansie Cronje, Herschelle Gibbs and Shane Warne a coherent and, in my view, largely honest account of exactly what their dealings were with bookies.
In the case of subcontinental players, unfortunately, we have had nothing like that. Which is understandable: guilty Indians and Pakistanis obviously knew there would be so much sound and fury around the issue of match-fixing, so much mud slung in every direction, that the public would come to doubt the culpability of any individual, as also the innocence of any player.

a lot of indian players were let off, because there were super powers behind them. dal mein kuch kala nahi puee dal hi kali hai

I saw Warnie at a petrol station in St Kilda last week. Alas no Miss Hurley with him.