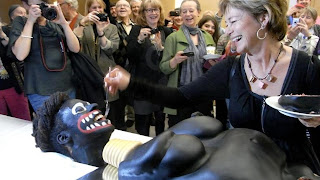 My friends' Facebook updates are full of shock and horror about Sweden's minister of culture cutting a 'genital mutilation cake'. The first story I read about the cake carried the image above. It struck me as odd that the minister appeared to be feeding the cake to the head of the cake, rather than eating it herself.
I later learned the occasion was a performance by a Swedish artist of African extraction named Makode Aj Linde; his real head was part of the cake installaion, and he screamed everytime a part of his 'torso' was cut.

Once I saw the video, the whole thing made sense to me. The piece is a protest against the history of imperialist racism and the custom of genital mutilation. It's strange to me that even those who've seen the video interpret the performance as racist in intent or effect. One Facebook friend linked to the video with the words, "This is utterly revolting. If this is “freedom of expression” as the article suggests it might be argued, then Sweden (and everyone) is doomed." I, on the other hand, think, "If this is viewed as racist, then art is doomed". OK, that's an exaggeration. I don't really think art is doomed. I only think it's doomed to be misunderstood through dissemination in the media. The way M.F.Husain's painting of Sita and Hanuman was framed in media discussions, for example, it was hard to defend except by reference to an ideal of free expression that neither the Indian constitution nor the majority of India's citizens support. It's weird to see friends who defended Husain expressing disgust at Makode Aj Linde. They still haven't understood how media coverage distorts art's meanings, which was for me the central lesson of the long years of Husain's vilification.
One reason a number of people are repelled by the video is that those cutting the cake, including the minister, laugh through the process. However, that's the way art openings work. There's the context of the event, which is convivial and celebratory. There's also the emotional context created by the art, which is often very different. Just because we sip wine and joke while standing next to images of barbarity doesn't mean those images have failed to convey their true import or that we are insensitive to it. If the art is good, it will stay with us, and our minds will return to it on many occasions in the future when we aren't sipping wine or chatting with friends. Those women cutting into the genital mutilation cake might be laughing, not only because of the event's context but because there's a kind of grotesque slapstick involved in the performance. But you can see some smiles turning uneasy even during the very short run of the video. I have no doubt the artist's screams, and the act of cutting into what seems at one level like a body, created a great deal of discomfiture among those who participated. It may not be evident from the video, but those who've experienced such performances know the slow-burn effect they produce.
So I have no complaints whatsoever about the ethical or political background to the cake cutting. My only objection is that the velvet sponge looks orange rather than blood red.

It's really a bad idea for politicians to get involved with contemporary art: I just don't see the upside. Years ago, the British Council organised a workshop with a group of British and Indian artists. The resulting show was inaugurated by the then Chief Minister Vilasrao Deshmukh. I was in the gallery when he arrived followed by dozens of photogs. On one side of the room hung a massive Subodh Gupta photo-portrait showing the artist nude, riding a horse. On the opposite wall hung an equally nude and equally large photo-portrait of a female British artist whose name I can't recall. I noticed Mr Deshmukh glance quickly around the room as he walked through the door, and immediately recognise the potential disaster awaiting him: his photograph splashed on the front page of the next morning's papers looking either at a naked man riding a horse or, much worse, a naked White woman splayed on a floor. Obviously, he couldn't glance at either wall even fleetingly as he passed those prints. He moved straight across the room to where the lamp lay waiting to be lit, without seeming deliberately to ignore the art. Once past the minefield, he pretended to take more interest in what was on the walls.
For those brief moments, I admired the man's presence of mind. It isn't easy being a politician in our age. Of course, as Vilasrao Deshmukh knows well, political power offers a number of compensations.
Posted by Girish Shahane Girish Shahane at 9:20 AM

there... youtube has helped you make your point. they have removed your video as it violated it's policy of prohibiting hate speech.
sometimes i wonder how we must accept all types of speech as right to free speech. so much for sergey and larry's rant about 'free' internet.

Hate speech! And nobody says a word during the performance...

Girish, I am more cynical than you about the Swedish audience and I don't know if I can wholeheartedly agree that "I have no doubt the artist's screams, and the act of cutting into what seems at one level like a body, created a great deal of discomfiture among those who participated". I personally saw more flippancy and mischief than uneasiness in the audience. The art piece as such is very interesting and in a different place and context, it would have achieved more and it may have already done what it was meant by bringing light to the superficiality and hypocrisy in the Swedish intellectual elites. Here is an interesting article on the issue:
http://www.theatlantic.com/international/archive/2012/04/the-brilliance-of-swedens-shocking-golliwog-cake/256168/
"The conversation within Sweden about African FGM can sometimes feel like it's more for the benefit of Swedes than it is for actual Africans... [Linde means to] draw attention to the subtle racial politics of Sweden's popular conceptions of FGM and Africans generally. That's not an easy thing to explain to people in words, but a screaming cake seems to have done it."
-- VV (ps: will be in Bbay in June. we must meet up if you are there)

Thanks for your note, VV; It's possible you're right. Palme's idea of the performance as mousetrap is intriguing. Here's a version that hasn't been taken off YouTube yet:
http://www.youtube.com/watch?v=Tdx4QXMZtmQ
Looking at the face of the first woman who cuts into the cake, I still spot a degree of unease: she's laughing because the occasion calls for it, but not whole-heartedly. Also, one of the women in the background looks rather distressed (again, not distressed the way one might at the site of an accident, but within the parameters of the celebratory occasion).
I accept, however, that a short video clip and a couple of photographs do not provide adequate context to interpret the piece. What we can agree on is, I think, that the artwork itself is not racist at all (as so many people first thought), but a critique of racism.

Oh, for sure. It was clearly a critique of racism. If anything, the disturbing part was the gender aspect, but even that, as a conceptual art piece, there is nothing much to take issue with. It was meant to shock and generate a reaction, which it did. In fact, if the artist actually intended to expose Swedish attitudes around race and the global South as the Atlantic article implies, then he is quite brilliant. I was more intrigued by the reactions of the audience than by the art piece.