Words extracted from an article published by The National, an Emirati newspaper: "Standing outside the gleaming tower of the Maker Maxity building in suburban Mumbai is a fire-engine-red double-decker bus ... This bus, however, sprouts two stainless steel wings ... A whimsical creation by Mumbai-based artist, Sudarshan Shetty, 50, at an estimated cost of US$250,000 (Dh920,000), this Flying Bus sculpture is arguably India's most significant public art project".Shetty's Flying Bus has been called a public art work, or art in a public space, by Mumbai Boss, Tehelka and the Telegraph, among other publications. My friend Deepika wrote, in the Economic Times, about Manish Maker, the man who commissioned the Bus: "He has a plan in place for incorporating artworks in the upcoming mall and hotel that will replace the family-owned erstwhile drive-in cinema. These are all public spaces anyone could visit".
A preview of last month's Art Chennai in the Hindu began: "For nine days beginning March 10, art buffs in Chennai are in for a big treat. Teams of artists are likely to take people in public spaces such as shopping malls and railway stations by surprise".
The line introducing the Grand Hyatt's artworks on the hotel's Facebook page reads, "Grand Hyatt Mumbai, houses one of the finest collections of commissioned art in a public space".
I can see why people think of malls, hotels and the courtyards of office complexes as public spaces, and art placed in such locations as public art. These locations charge no entry fee, and are visited by thousands of people each week, unlike art galleries which get few footfalls outside of opening evenings. The Grand Hyatt, though, is no Shivaji Park. Or Millennium Park, since we're speaking of public art. 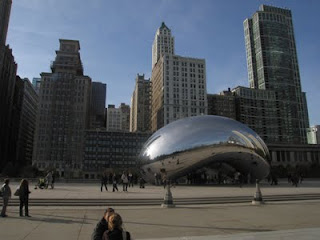 Sudarshan Shetty is among the finest artists of his generation, he is represented by an excellent gallery, and Manish Maker is a discerning collector. None of these things make the Flying Bus a public art project. I've been to Maker Maxity fairly often. It's one of the most expensive blocks of office space in the country. Alert securitymen at its gates make sure nobody gets in unless they have official business or want to eat overpriced pizza.
The confusion among journalists and affluent Indians about the nature of public space (the poor know very well that shopping malls and five-star hotels are privately owned and rigorously exclusionary) is sad. It means those among us best equipped to demand an expansion of public spaces and institutions are likely to believe the opening of a new mall actually constitutes such an expansion.
Posted by Girish Shahane Girish Shahane at 10:27 AM

Girish, since you mentioned what I wrote - that piece explored alternate ways of perhaps building museums outside of the western model since we are hardly likely to see major institutional support for contemporary art in India. Maker's is one model. I am hardly championing a mall as a place for public art and call his endeavour "a museum of sorts' further in the piece in the vein the article was written - of private initiative slowly going public in any which way it can. But Maker is to be commended - he is the only collector I know who is commissioning works for art that will not hang in his home for private perusal. Perhaps these are small beginnings which on being seen as done examples may push public art out in the city in a proper way. Everything in art in India seems to have started with private inititiative. I think this is the case here too. In the upcoming Art India I have written a piece which is a different model for trying to get public art into public spaces more democratically. I hope you will read that too.

Deepika, I have no quarrel with anything in your piece, or in the others I quoted, except for the notion that malls, hotels and office buildings constitute public spaces.

I agree on that Girish so was careful to call Maker's idea 'a museum of sorts' as it was his vision on his property.
I have written for Art India in the next issue of how countries go about public spaces and commissioning art works for them - it is mainly government driven. Since that is unlikely to happen here seriously ( I am not taking Mayawati's efforts as art) then what are the ways to do it outside of the government yet having to work with them as landowners of public space ? Private initiative again? And here it's tough - they have to work with the government and that you know puts paid to most contemporary art projects. So while I don't see malls or corporate offices as ideal places for public art or as democratic public spaces, they are in there own limited way, public spaces, like it or not. Even once we identify public spaces everyone approves of, you and I know what outdoor artworks cost these days. I don't see sponsors other than from the private sector,do you? Contemporary art is, so far, taking roots in India through the private sector almost exclusively. I am all for institutional support and hope it happens in a big way in my lifetime. Pragmatically though our country is beset with graver problems and can't see that happening.

Deepika, we are in a way speaking at cross purposes. I took off from contemporary art, but my concern in the post is not really for art in public spaces so much as public spaces themselves. Like, it's true that those elephants Mayawati put up aren't great art, but I was in Noida last month for the first time in five years, and saw the parks she built first hand, and they are really welcome new public spaces. I'd gone to see Gayatri's show at the Kiran Nadar museum within the HCL campus, and not only was finding the exhibition space difficult, the guard didn't let me in for fifteen minutes because I apparently didn't have some pass from the security gate. If they were trying to ensure no members of the public saw the exhibition they could hardly have done a better job; I was half-tempted just to head back to Delhi without seeing the show (didn't want to bother Kiran Nadar herself with such a small matter).

Ah yes. They better sort out these issues. It's at cross purposes to what they are trying to establish. You know, another friend, was recently in Lucknow and all praise for the public spaces in the centre - not the statues but the space itself. She was Parsi, so of course compared it to "like colonial times". Now perhaps Jnanapravaha should enrol U.P. government heads in an art criticism course in their Benares branch. So we can see art in the parks, not statues of politicians. Now I am closing comments from Mahab - going offline!

Even real public places like Carter Road promenade become exclusionary once gentrified/beautified. Okay,I am exaggerating a bit but I have seen working class people being hounded out from a Celebrate Bandra event, a ticketless program open to 'public'.

Actually, I like how Parivartan Park looks like. It borrows some of its asthetics from Lutyens Delhi who himself borrowed those very elements from Buddhist architecture, like the sandstone railings from Sanchi stupa and reclaiming it to where it rightfully belongs to the neo-Budhdhist narrative.

I agree about the Lutyens-style monuments and the fun history of appropriation and re-appropriation. Also, it's nice to see a giant memorial to Ambedkar and a number of places named after him. Whether those railings 'rightfully belong' in the neo-Buddhist narrative, I'm not so sure. They're over-used for sure. I live five minutes from Chaityabhoomi, which has a ghastly gateway and pillar. I recall a lecture at a seminar from a scholar of neo-Buddhist architecture who justified all kinds of dreadful-looking edifices on the basis that they returned Sanchi etc to their rightful place in history. As far as I'm concerned, the main issue is whether something's built well. Lutyen's Delhi is built well, and so, at first sight, are Mayawati's parks.