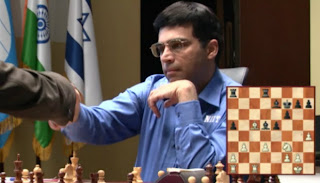 Yesterday, Viswanathan Anand capped a disappointing performance in his World Championship match against Boris Gelfand by playing out a draw that felt like a defeat. Vishy has been undisputed chess World Champion for five years. He won the title in 2007, defended it the following year against Vladimir Kramnik, and again two years ago in an exciting match against Veselin Topalov. In both those playoffs, Anand went into the match as an underdog or, at best, a very narrow favourite. His third defence was supposed to be easier, since he faced the relatively low-ranked Boris Gelfand. It hasn't turned out that way. The 12 match series started with six draws before Gelfand took the lead in the seventh. Vishy played brilliantly to equalise with white pieces in the eighth. Three more draws followed, leaving the players tied at 5.5 points with just one more game to play, a game in which Anand had the advantage of white.
The champion produced a novelty on the sixth move that put Gelfand in the tank for nearly an hour. Anand had given up a pawn, but gained compensation by messing up his opponent's position. None of Gelfand's pieces could move freely, his bishops were tied up behind doubled pawns, and Anand had all the initiative.
On his tenth move, Gelfand offered Anand two pawns in return for freedom of movement. It wasn't necessarily the best play available, but the challenger made it in the belief, correct as it turned out, that it would throw Anand off his prepared line. Between moves five and ten, Anand had been comfortably parlaying a line analysed carefully with his seconds in preparing for the world championship. He was banging out his moves instantly while his opponent had to improvise on the board. It was the equivalent of being in a section of a maze that Anand had traversed dozens of times, but which Gelfand was trying to figure out as he went along. After move ten, both players were in an unfamiliar section of the maze.
Gelfand had been put to a huge test, and had seemed for some time to be sinking into a mire of self-doubt and despondency,  but had emerged creditably.
He was, nevertheless, under some time pressure and a pawn down. He now had to simplify the position and hope his paired bishops would compensate for Anand's small material advantage. On his twelfth move. Gelfand offered an exchange of queens as part of his simplifying tactics. Anand had two options: the first was to take the queen and go into an endgame in which he couldn't lose, but had a very small chance of winning. The second was to reject the queen swap and instead push his queen sideways one square. That would create a double-edged position in which Anand had a far greater chance of winning, but could lose if he played a couple of sub-optimal moves.
The queen exchange was what a club class player like myself would choose almost every time. Not having the ability to think through every possible variation in complex positions, I would take the no risk - low reward option and try to press home that pawn advantage in a simple endgame. I would expect a World Champion to pick the slightly riskier move.
Anand played safe. He exchanged queens and, a few moves later, the consensus among experts was that there was about 95% chance of a draw and a 5% chance of Anand winning. That 5% chance, I figured, was sufficient for Anand to keep the pressure on Gelfand. It's difficult, psychologically, to play when you know your best hope is to draw. On move 20, Gelfand pushed a pawn and seemed immediately to regret it. Horrible blunders have been made under the pressure of playing in the World Championships, blunders no Grandmaster would make in less important games. It seemed possible the challenger would crack.

After playing move 22, though, Anand offered a draw. It left the commentators gobsmacked. Accepting a draw would have been bad enough, but offering a draw? Come on!
Chess etiquette demands players don't continue games when a draw is almost inevitable; but this was the final game of the World Championship, and the challenger was behind on material and in some time trouble. Nobody would have blamed Anand for pressing on at that stage. Offering a draw in that position was being Mr. Nice Guy to a ridiculous degree.
Maybe it wasn't just out of niceness. Anand, in the moments he spent at the table after the truce was signed, looked spent, almost dazed. Maybe he just ran out of steam. Which isn't a happy thought either.

There will now be a tie-breaker of four rapid games. Anand is generally considered among the two or three best players in this format in history, so everybody expects him to win. However, should he lose, I will not mourn, though I've been a fan of his for the longest time. To be a World Champion, after all, is not just about gaining a point more than your opponent, it's about courage, imagination and determination. I'm afraid Viswanathan Anand failed that test yesterday.
Posted by Girish Shahane Girish Shahane at 10:00 AM

I have been missing your blogposts, and am writing to say that I would so glad to see some new writing from you!

Thanks a lot, Meenakshi, I've been thinking about whether to call a halt to blogging, since conversations have dried up a bit over the past year; but a few people have told me they would like to see it keep going, and so I'll emerge from my dogmatic slumber soon.