The Vatican has been barred by Italy from accepting credit and debit cards, because the Italians feel the city state does not have a proper legal framework to prevent fraud. This means visitors can pay only cash for souvenirs, and will put a major dent in the Vatican's tourism revenues. The Italians were sensible enough to let the Christmas high season pass before clamping down. Presumably the matter will be sorted out before Easter.
In covering the issue, reporters have reached for a Biblical analogy that seems most apt: the cleansing of the temple by Jesus. Reuters, for example, went with, "... the move has nothing to do with throwing money lenders from the Temple or concerns about usury." Which gives me an opportunity to segue into an issue that really interests me, misreadings of canonical texts (I'm not particularly concerned about sales of postcards in the Vatican).
Pretty much every Christian who goes regularly to church has been told about the story of Jesus whipping the money lenders and chasing them out of Jerusalem's great temple. It's the standard text to bring up in discussions about Christianity, usury and the history of anti-Semitism. 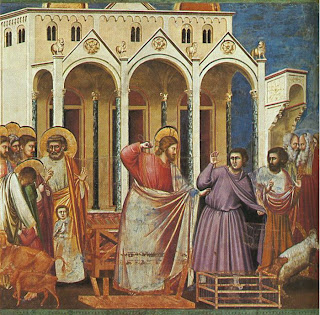 Yet, the actual incident has nothing whatsoever to do with money lending. Christian boys and girls have for centuries been fed a lie by their parents and priests (who, to be fair, probably act out of ignorance). By the time they mature, they cannot read what's before their eyes without substituting it with the incorrect interpretation they've been brought up to believe.
Here's the incident as told in the English Standard version of the Bible:
Matthew 21:12
And Jesus entered the temple and drove out all who sold and bought in the temple, and he overturned the tables of the money-changers and the seats of those who sold pigeons.
John 2:13-16
The Passover of the Jews was at hand, and Jesus went up to Jerusalem. In the temple he found those who were selling oxen and sheep and pigeons, and the money-changers sitting there. And making a whip of cords, he drove them all out of the temple, with the sheep and oxen. And he poured out the coins of the money-changers and overturned their tables. And he told those who sold the pigeons, “Take these things away; do not make my Father's house a house of trade.”

The phrase used is unambiguous: money changers, not money lenders. 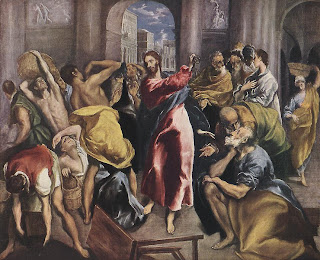 When you think about it, Jerusalem's temple, where most visitors were pilgrims, would have been the last place where money lenders would've plied their trade. Lending to people you barely know, who are in town for just a couple of days, and who live in distant lands, is the equivalent of giving money away.
Money changing was a different trade altogether. It involved providing local currency to those who came in with Roman or Greek coin. It required experts who could tell counterfeit metal from the real stuff, who could gauge whether any corners had been cut (the phrase originating from the practice of physically slicing off slivers of precious metal from coins), and who were familiar with a variety of currencies. The money changers were the equivalent of today's shops with signage exclaiming EXCHANGE WECHSEL CAMBIO BUREAU DE CHANGE. They performed a necessary service, helping pilgrims, local traders and the temple. They kept the entire economy of the locality going, and took a cut for doing so.

Jesus wasn't against any one type of business; he was against the idea that any business at all should be conducted within a holy site. Of course, if priests and parents told children this, they might get asked whether Jesus really did the right thing. Did those petty traders deserve to be whipped and have their little work counters turned upside down? Presumably, if Jesus had gone in alone, the money changers would've banded together and kicked him out. It stands to reason that he was accompanied by a group of followers, though this isn't mentioned in the Bible, and is not how the scene is depicted in the paintings of Giotto and El Greco accompanying this post.

There's another question kids might ask, if told the truth about Jesus's action: since Jesus was so firmly against any connection between places of worship and any kind of commerce, why does virtually every famous church, whether Catholic, Protestant, or Orthodox, contain a shop selling souvenirs? Why is the Vatican hawking postcards in the first place?
Posted by Girish Shahane Girish Shahane at 9:27 AM

Very good piece. I am from a fairly secularized background, so not steeped in any philosophies about usury, etc., but I always find misreadings fascinating as well. And I did not remember anything about the pigeons, but there they are, in both versions.

What's also interesting to me is that the specifics make this less a fable about Jesus than an account of an incident that might actually have taken place.

Thanks, Seana. The bit about the pigeons (or doves in some translations) militates against the idea that Jesus was after usurers, so dropping that is part and parcel of the deliberate misremembering, I suspect.

Since the third aspect of the Trinity is so often symbolized by the dove, I suppose it would be a bit tricky for him to chase out the dove sellers. Or maybe not?

Hmm, hadn't thought of it in that way. The doves being sold in there were for sacrifice along with goats and oxen. Depending on one's budget one could sacrifice large or small birds and beasts. Not sure if sacrificing doves came to sound particularly reprehensible in retrospect. They also feature in Abraham's prep for Isaac's sacrifice.

I believe Rene Girard's idea is that Jesus was symbolically the scapegoat that would end all other sacrifices. Put another way, to see through the idea that sacrifice was efficacious.

Very interesting. Another spin of the story that I have heard was that Jesus was against monopoly not business in general, specifically monopoly over currency generation (functions of the RBI and other central banks not the bureau de change). Madison used that story in his famous statement on banks and monetary policy “History records that the money changers have used every form of abuse, intrigue, deceit, and violent means possible to maintain their control over governments by controlling money and it’s issuance.” I believe this was during the debates around the creation of the first bank of the US (which Hamilton wanted).

The money-changers in Jerusalem, I understand, held the monopoly about how the money is to be transacted, the Temple Tax could be paid in this one limited currency whose value used to be arbitrarily inflated by the money-changers because they held most of that currency. So Madison was very anxious about giving federal monopoly to the minting of money to one institution. Wonder what Madison (and Jesus) would say about China and their holdings of US securities). VV

Hi VV,
Thanks so much for that elucidation. I had no idea about Madison using scripture in that context.
As far as the monopoly theory goes, I suspect it is one of those post-facto justifications of acts that are hard to justify at face value.
After all, Jesus not only threw out the money changers, he did the same with people selling animals for sacrifice.
I can understand him at one level. One recent post by me was about the Kali Temple in Calcutta, and going through that experience reminded me of the Jesus story. I half-wished someone would come in with a whip and set things straight. It's possible the Jerusalem Temple priests and vendors had the same mercenary attitude as those in and around the Kali Temple. Maybe they were cheaters inside a tourist trap (or pilgrim trap) and had a cartel going to fleece visitors. But that's still some way from being monopolists, except inside the Temple precinct, no? I'm going to look up historical evidence for the monopoly theory now.

OK, Madison was definitely equating money changers and money lenders. In fact, he was equating money changers with banks, which not only issue money but also lend it. The money changers in the Temple neither issued money (there was a monopoly currency accepted within the Temple in Jesus's time, but it was minted in Tyre) nor gave it on loan, so Madison, in speaking of the cleansing of the Temple, was following the erroneous tradition I've written about.
A number of commentators appear to be confusing the half shekel annual tax paid by adult male Jews to the Temple, with what the money changers were doing. This, again, appears misguided to me. Local Jews had access to the Tyre half shekel, and it was mainly these people who paid the tax. Pilgrims might also have paid the tax but they were mainly there to offer sacrifices and donations over and above that tax. Jesus doesn't seem to have had anything against the tax, for he paid it for himself and Peter. He did it, though, in the Jesus fashion: instructing Peter to catch a fish, and look in its mouth, wherein a four drachma coin would be found, enough to pay Jesus' tax as well as Peter's.

Reference the comment about churches also selling things, it's important to note the distinction between the one Jerusalem Temple with it's Levitical laws around purity and Holiness and the regular church that is visited on a weekly basis by non-levitical priests.