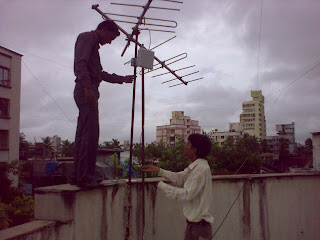 I contacted the Tata people, formerly VSNL, to provide me with a broadband connection, handing them a multi-month advance as demanded. For three days in a row they said they'd send men across and didn't. Finally, on the fourth day, the installers arrived. One was small-built, wore spectacles, and had just three fingers on each hand. The index and middle finger were fused together and twisted as were the ring and little finger. For some reason, I thought of the toes of a Cassowary, though I've never seen one of those birds. Great that the Tatas have maintained their commitment to the handicapped, I told myself, trying to shut out jokes about digital have-nots. The job, unfortunately, required a fair bit of manual dexterity. Eight thin, colour-coded wires had to be slipped into plastic connectors at both ends of a long cable. Cassowary's partner was a rookie who couldn't help because he knew nothing about electronics. He was the roof man. Tata Broadband uses Wimax technology, which involves placing a square antenna in an open space where it can receive a signal from one of the towers installed by the provider. The signal was weak at my first floor window, so we headed for the terrace.
"I hope this isn't like Tatasky TV", I muttered. "I don't want my connection failing every time it drizzles".
I was assured that wouldn't happen.
Roofman got to work, attaching the receptor pad to a rusty television antenna, and jumping down onto a wet ledge from where he lowered the cable to my window. Once Cassowary had finished checking signal strength and GPS coordinates, we headed down to drag the cable into my home and try out the brand new connection.
It did not work.
Roofman was told to move the square antenna this way and that to catch the signal better. He did not have a cellphone which made coordination between first floor and terrace less than efficient. Ultimately, I went upstairs and played interlocutor between the two using my mobile.
"I almost slipped while dangling that cable" Roofman said.
"The work looks really dangerous", I replied.
He’d spent the last few months installing dish antennas for Big TV. His beat was in an insalubrious part of town; most new Big TV clients there lived in shanties. His partner had put his leg through a sheet of corrugated metal the other day, requiring many stitches. The house owners fought with him for half an hour as he bled, insisting he owed them money for repairs. That’s when Roofman decided to switch companies. Broadband, he said, was used by good people in good homes.
It began to rain. After twenty minutes of instructing us to twist and turn the antenna, Cassowary gave up. The square pad was taken down, the cable disconnected and hauled up, bags packed.
"So, this means I can't get a broadband connection from you, right?"
"Right", Cassowary replied, downcast. Some weeks, he said, he'd visit ten houses and manage only one successful connection. The previous few days had been good, he'd been working mainly in Colaba, in high rises close to the sea where the signal was loud and clear.
I wouldn't have expected the Tatas to adopt such hit-and-miss technology. But then, I wouldn't have expected them to roll out a satellite television service which malfunctioned at the slightest hint of rain. They've done the brand few favours in recent years.
As for me, it is back yet again to square one: to MTNL and surfing in ten-minute bursts before having to unplug, replug and hope.

Digital have-nots :)
I wish I'd thought of that.
Related question: How funny does a joke have to be for it to overcome it's Potential to Offend Quotient?

Well it is my best bet insofar as it is my ONLY bet. But that's no reason to celebrate, it's like saying, "See, didn't I tell you Ahmadinejad was Iran's best bet?"

So much for us being a shining light unto other countries when it comes to all things IT. TATA had been a nightmare for one year that I had them. I spent more money on phone bills calling customer service than I actually paid for the Internet. Getting hold of email addresses of the top bosses at VSNL - cutting through the call centres - has been of some help. We now have Sify and haven't had any complains so far. It is slow but atleast it works!

Yeah, our IT services revolution has thrown up some unreal assumptions. Like I met these Germans a while ago who couldn't get over how slow internet connections were all across India. "Vee thought, you know, zat India vas zis information technology superpower"...

remember how vsnl was the best service provider, till the tata's took it over, and down the tube it went.

Wrong again, Anonymous. VSNL was a terrible service provider. It was also, for many years, the ONLY service provider, which set our broadband development back many years. As an employee of an organisation that attempted to get a high-speed line from VSNL, with last mile connectivity by MTNL, I witnessed the deep corruption in both organisations, so wouldn't use any complimentary terms to describe them.
But you are welcome to go on praising inefficient, corrupt monopolies, I know some people like those.

'Ten-minute bursts before having to unplug, replug and hope.'

Thats exactly how it is for me too. It breaks while downloading files, which drives me nuts. When I get really frustrated, I unplug the modem and use the GPRS connection on my mobile phone to connect and that connection in turn is transferred to the comp using bluetooth. Slow, but it works.

It's fashionable to deride MTNL broadband, but I've been using it for over 3 years now, and the prices have only gone down while QoS has improved from erratic to fairly reliable. (In the sense in the past one year it has been down for a total of about 9-10 days). Speeds are fairly good : I download movies (Triband unlimited: ) ).

None of the private service providers has been able to give me a decent working connection that I can rely on for my laptop : whether mobile or fixed.

As for costs ... depending on service providers, I would guess we are mid-range worldwide.

AKM, I don't know about fashionable: I have derided MTNL broadband because IT DOES NOT WORK. I, too, had a good connection for three years, but that changed a couple of months ago. I have described my experience in detail in previous posts, and I know I am not alone. The MTNL guy who came to fix the connection (and failed) told me that MTNL servers were hit by a massive virus attack around the time my connection began malfunctioning and they haven't sorted it out yet. Each of their servers now handles twice the load it is meant for, leading to slowdowns every afternoon, plus the repeated disconnection problem Mukul and I speak of.
Just because your connection hasn't been hit shouldn't lead you to conclude others are cribbing because they like to, or because they are liars, or merely because it is fashionable.

This seems to be a problem all over Bombay, Girish, with friends in South Bombay as well. Obviously it is a major system problem they have.

Read our friend Ajay's account from 2007 about dealing with MTNL people and this is infuriating and hilarious at the same time. http://noro69.blogspot.com/2007/04/how-to-shake-mtnl-up.html

Try Airtel if they provide it in your area.
I've used it and it works.

I agree with anon - Airtel's connection is very reliable and so is the after-sales. I tried just about everybody else before deciding on Airtel.