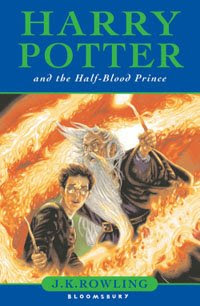 To mark the release of the film version of the Half Blood Prince, here's my ranking of J.K. Rowling's seven volume series. I haven't looked at any of the books since reading the final line of The Deathly Hallows, and am putting these thoughts down without refreshing my memory.

Volume 1: The Philosopher's / Sorcerer's Stone.
Rank: 3
A fascinating new world is created, the ways of witches and wizards described for the first time, the pace is fast and the adventure exciting. What more could you ask from a kids' book?

Volume 2: The Chamber of Secrets.
Rank: 5
Surely Dumbledore or somebody else ought to have figured out there was a basilisk in the pipes.

Volume 3: The Prisoner of Azkaban
Rank: 1
For the first time, a hint that this is more than a really good series of novels for children. Darkness descends on Hogwarts thanks to the Ringwraiths, sorry, Dementors. There's real emotion, fear and joy, a connection forged between past and present. Supplementing the caricature Hagrid we get the complex Lupin. And the revelation that solves the mystery of Sirius Black's actions is excellent.

Volume 4: The Goblet of Fire
Rank: 4
J.K.Rowling turns self-indulgent, but because Harry is by now a global phenomenon, no editor is going to tell the author to cut out the flab. Quidditch is a silly game (the golden snitch too important to the outcome) and the prolonged description of the World Cup tedious. Patches of excellent writing, though, like the view Harry gets, through the pensieve, of his father harassing Snape. The mudblood and house slave controversies bring contemporary politics into the equation.

Volume 5: The Order of the Phoenix
Rank: 7
This massive book, the longest in the series, need not have been written at all. It adds virtually nothing to the plot. The publishers probably realised this one was a turkey, and created huge quantities of hype about the death of a character close to Harry.

Volume 6: The Half Blood Prince
Rank: 2
A wonderful return to form, from an adult's viewpoint. The horcruxes bring the plot back on track, while Dumbledore's past is fleshed out movingly.

Volume 7: The Deathly Hallows
Rank: 6
This might seem an unfair rank for a book that advances the action in so many directions and then brings all the narrative threads together. Nevertheless, the stakes at the end are always much greater than at the start, and Deathly Hallows does not rise to the expectations generated by years of waiting. The scenes in the countryside are dreary; Rowling, who had problems with battles earlier, doesn't improve during the attack of Hogwarts; and the climax involving a horcrux in the Room of Requirement is extremely disappointing for those enamoured of the mystery.
Posted by Girish Shahane Girish Shahane at 9:49 PM

Half Blood Prince my fave. The sadness of Dumbledore's betrayal and death wouldn't leave my bones for days. Prisoner of Azkaban close second.
Always felt my kids were privileged for Potter have to come up in their growing up years. If she could create a world so vivid in my mind, can you imagine what went on in a child's head? These books tackled adult themes like no other children's books did and what about that anticipation every birthday or mid year to lay their hands on the next new volume and lose themselves for a couple of days from the real world again? I would stay up nights to read the book while they slept. :)

Half Blood Prince and Azkaban are clearly at the top for adults, I wonder how kids respond to these two volumes. Azkaban, at least, has the cathartic Patronus, but HPB just gets darker and darker...

Harry Potter was a great journey. I had started off a year late and got the first and second book from US. So it is Sorcerer's Stone for me. And I have this bad (?) habit of reading in the loo. And I took the longest dump of my life finishing the last 150 pages of Prisoner of Azkaban. The revelation fascinated me. I felt that it couldn't have been someone's imagination, but someone had to chronicle it -- much like LotR.

here's a trivia on HP from our very own mumbai. did u know there is a professor at Xavier's whose full name includes 2 important HP characters ? She's Hermione Salazar and i think she should ask JKR for royalities ! S ANAND

That's funny, SA. I know about Ms.Salazar, she was one of my sister's teachers at Xaviers.

PS: I meant HBP, not HPB in that earlier note.

VnP : Reading in the loo is a good habit. We are a family of loo readers and sometimes dumps end only when someone threatens to break the door. Then the book has to be kept aside.
So longest dump for PoA end is a good critique!

Thought I'd give you feed back re Maya's choice, my 15 yr old daughter. GoF, HBP and PoA, top three. So kids can handle dark.....And she found CoS the scariest!

Very interesting; good to know there is some common ground across generations.
For no reason at all, I am reminded that 19th century Germans loved the Merry Wives of Windsor.

I've only read book 3 which I thought was OK. I've tried book 1 a couple of times but couldnt get past the adverbs and the names. I appreciate that its a phenomenon and its heresy to say anything bad about HP (championing the cause of Al Qaeda would a safer course) but I think that JKR's prose is a bit of a backwards step for English literature.

Again, personally, I think Books 1 and 2 of Philip Pullman's His Dark Materials trilogy are in every respect superior to anything in the HP sept.

Adrian, I believe A S Byatt, among others, has said nasty things about Rowling's writing, so the heresy is alive and healthy among the literati. Personally, I don't think HP is a bad introduction to English fiction for a generation unlikely to read as many books as ours did growing up. But Rowling is no stylist, that I accept.

Oh AS Byatt can say anything. And does. Really though try those Philip Pullman books esp books 1 and 2, I do think you'll like them.

Oy Girish, the view of James Potter harassing Snape is in Book 5 !
And yes, I completely agree that book was generally a waste of paper.

Oops, I'm getting 'em confused, thanks for the clarification.