The World Series of Poker 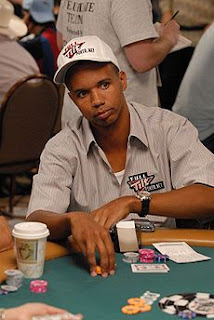 For the past week, I've been tracking the Main Event of the World Series of Poker, highlight of the international poker tournament calendar. Anyone willing to shell out the 10,000 dollar entry fee can play the Main Event; about 6500 people did this year, meaning top prize will be over 8 million dollars. I'm excited because, with the field down to 27 after seven tough days of play, one of my favourite professionals, Phil Ivey, is still in the hunt, and among the chip leaders.
Poker has exploded in popularity in the past decade,thanks to three interlinked revolutions: the television revolution, the internet revolution and the Moneymaker revolution. The game comes in many variations but, in most of these, players are dealt two or more cards face down, and have to match them with community cards dealt face up to form a hand. Betting happens in stages, and at each stage players try to guess hands their opponents hold while disguising their own. The guessing and disguise is skill, but the cards dealt are a matter of luck. Poker is unique in being a form of gambling where skill can assure a player better than even chances of winning in the long run.
It was difficult for the game to develop into a spectator sport because most hands end without a showdown of cards. One player, convinced an opponent has a better hand, chooses to fold rather than call a bet. Till the late 1990s, viewers could only guess at the hole cards of the antagonists. This situation changed when cameras grew tiny enough to be embedded in tables and capture face down cards as players peeked at them. 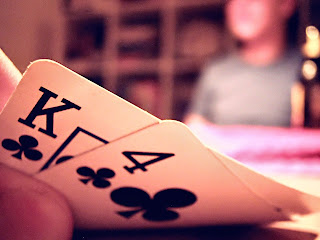 Suddenly the art in every hand became manifest and sports channels began devoting hours to poker coverage, bringing new enthusiasts to the felt tables.
Not long after this, gaming became big on the Web. Poker sites drew thousands of novices eager to start with small stakes and graduate to the big league. The sites ran satellites offering entry to major live tournaments: put down 550 dollars and you could participate in an online tourney offering a Main Event package. If that was too steep, you could try your luck in a satellite to this satellite, and so on down to super super satellites where entry was just a couple of bucks.
In 2003, an Atlanta accountant with the portentous name Chris Moneymaker played a 39 dollar satellite on PokerStars, the most popular poker site in the world. He won a seat to a more expensive online tourney, and placed well enough in that to win a Main Event package. He went on to win the Main Event itself, turning his initial 40 buck investment into 2.5 million dollars. 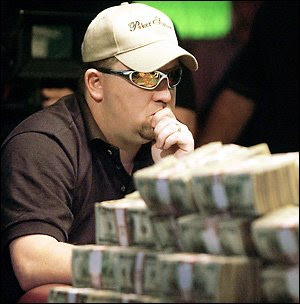 News of his extraordinary ride sparked a new rush to poker sites, which meant fields for major live tournaments grew ever larger, the top prizes on offer juicier. By 2006, James Bond was playing poker in Casino Royale, instead of baccarat as in Ian Fleming's novel, and a Hollywood talent agent named Jamie Gold was winning 12 million dollars at the Main Event. It was a world away from the seedy backrooms described in Kenny Rogers' famous song, The Gambler: "You gotta know when to hold 'em / know when to fold 'em / know when to walk away / and know when to run".
For professionals, there was a significant upside to the poker boom: lots of mediocre players willing to gift their money ('fish', in poker parlance). On the other hand, navigating the waters of massive tournaments became difficult even for sharks: there were too many accidents waiting to happen between the first cry of "shuffle up and deal" and the crowning of a new champion. Those who'd gained entry through super satellites had little to lose and would frequently make crazy bets or calls and get lucky when the final community card was dealt. The Main Event became a professional's graveyard and the buzz went round that no top pro would ever win again.
The odds themselves told a different story. If one were to assume 200 well-known pros in a field of 6000, and give each pro three times the winning odds of an amateur, that would make for a top pro as champ once every ten years or so. Apart from the odds, grumblers also ignored the fact that many unknowns had built successful pro careers after a Main Event triumph, among them 2004 champ Greg Raymer, 2005's top man Joe Hachem, and last year's winner Peter Eastgate.
Chris Moneymaker, though, cannot be counted among those names. He has returned to the Main Event each year since 2003, but failed to make an impression. Back in his wonder year, he got very lucky late in the tourney against two pros, Humberto Brenes and Phil Ivey. In each case, Moneymaker was far behind when all the chips went in, and caught an unlikely card to come out on top. The brutal hand against Phil Ivey can be seen here. Moneymaker is a 6 to 1 underdog with a single card to come, but spikes an ace to send Ivey home in 10th place.
Perhaps that hand had something to do with Phil Ivey's attitude to the WSOP in the following years. After he burst on the scene in the early part of this decade, his aggression, ability to read opponents and, well, ethnicity, made him known as the Tiger Woods of poker. Over time he appeared to lose interest in tournaments and concentrated on high stakes cash games at the Bellagio in Vegas and online at the website Full Tilt.
2009 has been different. He appears to have realised that winning major tournaments grants a place in poker history, while cash games offer only cash (OK, that's not strictly true, cash games have their own history and Ivey made some of it when he took businessman Andy Beal for over 16 million dollars back in 2006). Ivey's won two subsidiary events already at this years world series, and is in a promising position as the Main Event reaches its temporary conclusion (once just nine entrants remain, play adjourns till November, by which time ESPN's weekly coverage will reach its climax, allowing for the final table to be broadcast live).
The Moneymaker revolution was excellent for poker in its time, but an Ivey win might be equally significant in the current situation. The United States has clamped down on gaming sites, and poker buffs are petitioning the government to exclude their favourite game from the purview of the legislation, arguing that poker is a game of skill rather than chance. Were a top professional to win the most prestigious prize in poker, their argument would be bolstered considerably.
Ending on a light note, here's an amusing commercial for the website Full Tilt, featuring Phil Ivey.

Update: Ivey made the final table, but has a short stack and will need a lot of luck to win in November.
Posted by Girish Shahane Girish Shahane at 11:19 AM

Hey are you following it on TV - which channel, what time?

Not on TV, unfortunately, just through text updates on the WSOP site.

ESPN will start airing the the 2009 WSOP from 28th July in the US. I usually newly uploaded videos on this site - www.pokertube.com
Each episode in broken up into segments of 10-14 minutes.

I think you'll find the pre-lim bracelet events after 30th July on the above site. Hope you have a decent connection for streaming video.