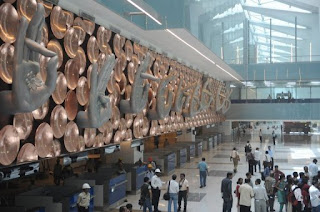 With the opening of a capacious new airport terminal, Delhi's taken another step towards becoming indisputably India's premier city. The old terminal contained a large mural by M F Husain, India's most important painter; the new one has ghastly artworks like the one pictured above. I have a feeling, though, that it will be superior in every other respect. A Metro link is being built as well, which means India will finally have an airport with a public transport link attached. Bombay, of course, can't even organise a bus service to its domestic and international terminals, leave alone a high speed rail connection.
The problem with Delhi remains, of course, its people. That'll take a few decades more to sort out.
Posted by Girish Shahane Girish Shahane at 11:45 AM

I was in Delhi a month ago (before Metro was in place), and needed to travel from Pragati Maidan to Domestic Airport. I wanted to try the Metro as I had no baggage. The metro attendants do not know the nearest station to the airport. The geographically nearest I knew(Dwarka-Sec-9) had no connecting conveyance to the airport. I had to come back to Dwarka-Node(6 stations back) to get a bus. The bus promised that it goes to the airport and dropped me 2 kms outside on the highway, from where I couldnt cross the road to the airport.

Mumbai is much-much-much better than Delhi. Buses 322 and either 330 or 374 go to domestic airport. On my last visit to international, I saw BEST buses there too. I do not expect a BEST conductor to drop me at the highway promising to go inside the terminal

Yes, Delhi has a people problem which will take a few decades to sort out. :)

I am not sure about other airports but ever since it started, the new Bangalore International Airport has had a very good network of Volvo buses connecting it to almost every part of the city. And the Bus terminal interfaces very well with the arrival/departure gates.

Urmilesh, good to hear about the new Bangalore International Airport having bus connections. Khalil, it's true that Delhi doesn't yet have a metro connection to the airport, but it seems they're working on it, which is more than can be said about Bombay.
As far as the BEST buses you speak of are concerned, they serve mainly people working in that area. They are standard local buses traveling relatively short distances, and stopping a fair distance from the terminal. For people flying in to the city, what's required is special buses equipped to handle large suitcases, and connecting with major hubs. The international airport definitely should have fast, air-conditioned buses connecting with Colaba, leaving the terminal every half an hour.

many yrs ago in the mid 90s , the ex-servicemen offered a great service form AI bldg in NP to the airport.
my dad used it once - torrential monsoons had ensured no cabbie would make the trip and it took a lot of coaxing and pleading to get a cabbie to drive him from colaba to NP. and as it happened,his was the lastflight out of mumbai for 2 days. S ANAND

yes you are right. sometimes i do believe that teh other cities will get it right and mumbai will be left with its high horse in the form of a shivaji statue. even ahmedabad has improved over the years.
we will slowly but surely manage to kill mumbai

Do you have any views on Public Art?

Besides, a lot many guys of my age are studying Murals these days, but as it is not been widely seen and recognized, there is fair platform for mural artist in India to show their work!

Does Mural is restricted to its defination as a painting on a wall..

i was seeing d mural n i found there r no emotions to it, only the material n the form is used suitable to airport but the atmosphere is not created ,, its too artificial n dead. but modern with its look n sophisticated..