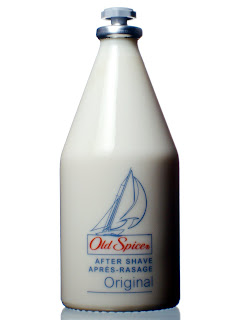 The first fragrance I used regularly was Old Spice. There wasn’t an option in those days. You either applied no aftershave at all, or you applied Old Spice. The brand’s advertisements played regularly on television, featuring bronzed, square jawed surfers; and the crescendo from Carmina Burana’s O Fortuna. I was aware that, in the wider world, Old Spice was an unfashionable brand. A Billy Joel record I possessed had him singing of taking his old man’s Trojans and Old Spice aftershave. If Billy Joel’s dad used Old Spice it couldn’t possibly be cool. My dad used it as well, and a similar conclusion could be drawn from that fact. In any case, how hip could a product be that had ‘old’ in its name?
I’m gobsmacked, therefore, that Old Spice has made a comeback. It's all thanks to a series of advertisements that have gone viral on the Web. The clever original spot, for Old Spice shower gel, cannily took aim at the notion that such products are for girlie men. It also targetted women, because surveys showed they were the ones buying stuff like shower gel for husbands and boyfriends.
Here’s a long interview about how the commercial was made.
Posted by Girish Shahane Girish Shahane at 9:20 PM

My dad used Old Spice too, so their branding power goes back quite a ways.

I hadn't seen the ad, so thanks for that. At first I thought the spot on making the commercial sounded too long, but I started watching it and it was fascinating.

The only flaw in the logic of the ads is that women after watching the ad will say, "Forget Old Spice, where can I get some of that Isaiah Mustafa?"

Thank you so much from giving me the name of Carmina Burana O fortuna, as the music used to haunt me but I never knew who /where the music belonged to....Srikanth

Memorable, isn't it? Only problem was, when I heard it in concert, all I could think of was Old Spice.

A plea to Old Spice wearers: Please dont wear it when you know you're going to the swimming pool later in the day. That stuff has the half life of uranium.

Also, great use of social media, from what i too thought of as a so-last-generation brand..
http://www.lbhat.com/online/i-heart-old-spice-digital-campaign/comment-page-1/#comment-4661

PS: thanks for highlighting the music - it is timeless. old spice rules!!

ya... that piece will forever make me think of old spice. once i went to a zubin mehta concert and i could only thinkof tom and jerry.
i am culturally deaf!

i think everybody's father wore Old Spice.....n now every time i get a whiff,its a safe.....comfort feeling