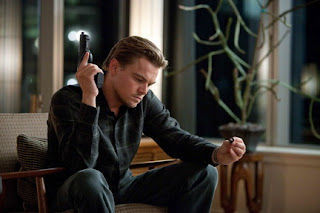 DiCaprio was close to taking on the mantle of the leading actor of his generation after performances in Gangs of New York, The Aviator, Blood Diamond and The Departed. However, a certain predictability has crept into his recent work in films such as Revolutionary Road, Body of Lies, Shutter Island and Inception. He's probably lost the opportunity to be compared with the actors of the golden generation of the 1970s, the Jack Nicholsons, Robert DeNiros and Al Pacinos.
Posted by Girish Shahane Girish Shahane at 1:34 PM

Good point, Although I personally believe that this is one of its kind of a film, I thought a flaw exists in terms of the storyline. THe film has been constructed on the assumption that dreams are logical, I am not sure if dreams can be logical ....Srikanth

Wordy, indeed. I was getting quite annoyed with Leonardo's brooding, long explanations, almost every 10 mins and in the second half it seemed too pat, almost like an after-thought to provide internal consistency. I generally dislike rules being changed every 15 minutes in sci-fi/fantasty films. There has to be a core, steady framework.
My bigger problem with the movie was the weakness of the "conflict". Every good movie has a good conflict (and Nolan was the maester of that in Dark Knight and Memento and even Prestige). Here, there were two conflicts. The "physical" conflict played out between the subconscious and the intruder ... which apart from providing good special effects was quite lame considering the canvas he had (dreams, ideas, mind, subconscious, etc). The other conflict b/w Leo and his demon created by his past ended up being quite superficial and not very convincing in the end.
It was thrilling and a lot of fun but the movie certainly fell short in depth and intensity.
And Leonard needs to really build another expression other than that brooding, furrowed eyebrows look.
-- VV

Srikanth, agree about the logic bit, and VV, great analysis about conflict or lack of it.

I couldnt understand a word Cotillard said and Cillian Murphy looked like someone had taken away his toy train set or something for much of the film.

You're right, no proof is needed that Nolan is in the same league as Kubrick. It isnt even close.
Every time there was a script problem Nolan solved it with a punch up or a chase.

At least it was better than his ridiculously overrated Batman films.

I thought Murphy's father DID take away his toy train set... Anyway, in past roles he's always had a fixed smooth villainous look, so this seemed like a huge improvement to me.
I liked Nolan's Memento and (yes, I admit it) The Dark Knight, but wasn't thrilled with Insomnia, The Prestige and Batman Begins. Even the films I liked didn't seem like masterpieces, and Inception doesn't either.

I guess all the pre-release hype set it up as a "great" film, which obviously its a long way away from. After one gets the basic plot premise, its basically an enjoyable hollowood action movie. This was my take:
http://42ing.wordpress.com/2010/07/31/thoughts-on-inception/

Yes, up to a certain point your right "Inception" does lose steam and does become predictable. However I disagree with your opinion that a certain predictability has crept into DiCaprio's work. I was wondering what would be unpredictable-do run of the mill action movies. I think he has delivered good on his choice of roles.

If you believed all the hype, Christopher Nolan’s Inception would be the greatest movie ever made. But you shouldn’t believe the Internet hype. Nolan’s sci fi dream-heist-caper is a great movie and one of the best of the summer, but blind Nolan-worship from the ‘net has piled on the hyperbole to create expectations that no movie could ever reach.

You're right about heightened expectations, Shoumya. And I agree with you that DiCaprio's chosen well. I wasn't speaking of his choices being predictable but the way he plays the roles. But we can disagree about that.