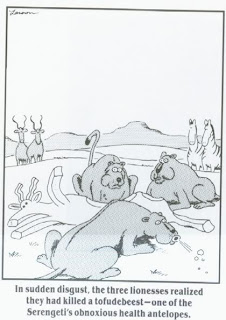 I came to this article from Time Out a bit late in the day. It's about a meat eater turning vegan for a week in the interests of investigative journalism. There's precious little investigation done, however; as is normal in the Indian media, anything anti-meat gets a free pass. In all these years of reading Indian newspapers and magazines, I cannot recall coming across a single prominent, coherent defence of non-vegetarianism. What do I mean by 'coherent defence'? Well, something well reasoned and backed by facts, like this great article about foie gras. Since foie gras involves force feeding ducks or geese, it's pretty much the worst thing a human can eat from a moral vegetarian point of view. Among the things Kenji Lopez-Alt reveals in his essay is that geese and ducks do not have a gag reflex; therefore, having a tube stuck down their throat does not traumatise them as it would a human being.
Vegetarianism I can handle, at least of the non-proselytising variety; it offers plenty of healthy eating options for those inclined to eschew meat, and it possesses a strong supporting moral framework. But vegans are like Jehovah's Witnesses: not only do they follow an idiotic, fanatical philosophy, they obsessively try to convert all and sundry to it.
I thought I'd annotate part of Neha Sumitran's vegan-for-a-week article, because I'm annoyed at the silly ideas of a vegan preacher being given so much free play in an excellent publication. Sumitran's words are in itals, mine in normal font.

Now for the snacks. Careful scrutiny of the miniscule list of ingredients on the labels revealed that most of Parle’s biscuits (Magix, Monaco, Nimkin and Hide and Seek) are all vegan, as is Bourneville chocolate (no milk, just cocoa butter) and Pickwick cream wafers.

I've noticed a number of good writers spell 'minuscule' as 'miniscule'. They are so confident of the 'mini' bit they don't bother spell-checking it. But the use of 'mini' as a root is recent, and back-dated in our minds to connect with words like 'miniature'. 'Miniature' has nothing to do with size, however; it is derived from 'miniate', meaning 'to paint or tinge with red'.

The list of ingredients on a bar of chocolate or pack of biscuits is not only minuscule, it is incomplete. A company is only obliged to list non-additive ingredients if they constitute more than a certain percentage of the product by weight. That percentage varies between 5 and 25% depending on the product and the nation. What this means is there's no way of telling a product is vegan by looking at the ingredients' list. In the list Sumitran provides, I suspect not a single entry is entirely free of animal products. Bournville (not Bourneville) chocolate certainly uses milk powder or condensed milk. Ther's no way of making chocolate without dairy products, unless one uses soy as a substitute or else raises the cocoa percentage to something like 70%. The writer's vegan week was, it turns out, pretty unvegan.

[Nandita] Shah’s name popped up many times over the course of the vegan week. The founder of Sharan or Sanctuary for Health & Reconnection to Animals & Nature, is from Auroville, near Pondicherry, but travels across the country to convince people that dietary and lifestyle changes can result in better health. Shah’s most popular lecture, Peas vs. Pills, has been conducted in India, Europe and the US. As I sipped on hot herbal tea at her workshop in Lower Parel later in the week, I learnt that vegans rack up karma points for more than being kind to animals. A 2006 report by the United Nations Food and Agriculture Organisation says our omnivorous diets generate more greenhouse gases than all the cars in the world. It blamed meat production for contributing 14 to 22 per cent of this toxic smog. It turns out that vegans, with their soy-lattes, Pickwick wafers and aloo-tikki subs, are actually saving the world.

It ought to be illegal to put soy lattes, Pickwick wafers and aloo tikki subway sandwiches in the same sentence on grounds of good taste. Why doesn't the article talk about all the great vegan food we eat in the normal course of things in India, roti sabzi, daal chawal, idli sambhar, that kind of wholesome, appetising food, rather than these mutant inventions?

The 2006 FAO report referred not to meat production but to the livestock sector as a whole. It is true these animals are raised for meat in places like the US, but that's not the case in poor countries like India, where male cattle are used mainly as draft animals to produce... the grain and veggies vegans love.

Meat production does strain the environment, particularly in its factory farming mode. But the real threat to the environment began with the invention of agriculture. The most environmentally friendly societies, which regulate their own populations carefully, are tribes of hunter gatherers. And they're all meat eaters. Women in hunter gatherer societies usually suckle their infants for extended periods as a birth control technique; that's because the lifestyle can only support a population of something like 1 human per square kilometer of earth. Agriculture allows a far more intensive exploitation of resources, and therefore permits a massive increase in population density. The huge surge in human numbers that's the ultimate cause of environmental degradation began with farms taking over forest land.

But many vegans in Mumbai haven’t give up animal-derived products just because it is a dearly-held cause. They do it because they believe a vegan diet is healthier and to help them lose weight. Shah’s 50-person workshop was filled with people who would never hoard Pickwick wafers in their bags, as I had. Groups of middle-aged women exchanged vegan recipes and talked about their weight loss, the energy they’d gained and how their skin and hair was glowing more than ever. Shah, a doctor of homoeopathy, has been vegan for over two decades herself. She claims that a healthy vegan diet (one that even eliminates vegetable oil) will not only control but reverse diabetes, hypertension, obesity and auto-immune diseases.
“Who is a mother dog’s milk meant for?” she asked at the start of her workshop. “A puppy. Even a kindergarten kid can answer that. So why are cows any different?” One might ask, what about the vitamins and calcium and protein we get from dairy? According to Shah, a cup of kale or spinach leaves, or two tablespoons of sesame seeds, has double the calcium in a glass of milk. The only essential vitamin that vegans can’t get from food, she claimed, is B12. The debate over whether we should be dietary hunters or gatherers is the religion vs science argument of the food world, and it was clear which side Shah and her crew were on.

I'm waiting for the PETA video showing cattle mistreated in the production of grain. If one is concerned about animal rights above all else, I don't see how one can eat anything in India; not just milk, everything's produced by exploiting animals.

For those who claim veganism is the natural state of humans, there is one insurmountable stumbling block: Vitamin B12. It can only be derived from animal products. Mammals that do not eat other animals get it by one of two means. Many regurgitate food, and the semi-digested cud brings with it B12-rich bacteria that grow in the stomach. Non-ruminants get their B12 by eating faeces. Since humans are not ruminants, and don't in general love ingesting shit, they can only get B12 by eating animals or animal products. An absence of B12 in the diet will cause anaemia and a degeneration of the nervous system leading eventually to death. So how do vegans get their B12? Through vitamin supplements. Since our forefathers had no pills to pop, no fortified cereal to munch, it's safe to say they'd have gone extinct had they not been omnivores. It's disappointing that a supposedly investigative piece fails to question a vegan propagandist more closely on this obvious Achilles heel. But that's the sort of free ride I've come to expect.
Posted by Girish Shahane Girish Shahane at 12:10 AM

Girish,
Shah is a Jain name. They don't eat meat and cheese out of belief. Jains are quite obsessive about this sort of thing.
If a Muslim were to say she insisted on halal meat because it had nutritional benefit, would we take her seriously?

Aakar, there's definitely a caste-based and religious grounding for much of the vegetarian propaganda one hears; disguised usually in some fake science.

Where is that cartoon from? As I've said earlier as well the pictorial content here is always excellent. You must have a great pic-search engine.

Thanks, anon. It's an old Far Side cartoon. I searched for Gary Larson and tofudebeest on Google images and found it immediately; the portmanteau word helped a lot.

This reminds me of Menaka Gandhi's column in Mid-Day in the early 90s when I was a sub there. One piece had a ludicrous analysis of the intestine length of carnivorous animals vs humans, to prove that we are biologically not constructed to eat meat. Then, in another another piece, she explained that she fed her dog only vegetarian food because "it is sick to feed animals to animals."

Aakar, I agree with you except for the fact that veganism doesn't originate in India, does it? Jains don't eat cheese because if may contain rennet, an acid produced in calves' stomachs. But they don't have a problem drinking milk.

I feel that the people who are vegetarian (or only eat halal meat) out of religious belief are okay, because they just do it out of personal faith and don't usually mind what others eat. They are quite a different type from the irritating activists claiming moral superiority.

Waiting for you to write a defense of non-vegetarianism.

Hey I thought the increase in meat demand and production WAS bad. Monocultures for one, and feeding the poor buggers with GM corn. They're even training fish to eat corn now. Yes the pickwick business is silly.

It's an old article but relevant I think.