The Kiran Nadar Museum of Art opened its new premises at DLF Place, Saket, with a huge party during the India Art Summit. The move from NOIDA, where it had occupied a hall in the HCL campus, has been accompanied by an expansion of the art on display and, more importantly a shift in focus from modern to contemporary art.
The first work I encountered on entering was Bharti Kher's bindi-decorated elephant, titled The Skin Speaks a Language Not Its Own, which sold at Sotheby's in London in June last year for 7 crore rupees (1.5 million dollars). 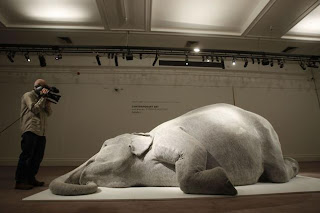 There was a ring of guards around it, protecting it from the wine-sipping, canape-nibbling horde. I had a vision of Kiran Nadar holding a rifle and placing her foot on the fallen beast, for it was a trophy of a kind. I soon realised the entire museum was made of trophy artworks, bought for top dollar at auction for the most part. Nadar apparently attends auctions and bids herself, which must be an auctioneer's dream. Even on the rare occasion she doesn't get what she wants, I'm sure her underbid is high enough to ensure a high winning price. Walking through the galleries I ticked off a few auction records, and I don't follow results all that closely, so I probably missed more than I caught.
Obviously a collection built in this fashion can't reveal any personal vision. The Kiran Nadar Museum display is eclectic, disparate, and ultimately less than the sum of its parts, though the parts are so exceptional that even the 'less' is substantial. Nadar appears to resemble some late 19th century and early 20th century American multimillionaire collectors who didn't have strong personal tastes, but knew they wanted the best and were willing to pay whatever it took to get it. Nothing wrong with that.
Posted by Girish Shahane Girish Shahane at 2:55 PM