Christina Aguilera's been singing the Star Spangled Banner at public functions since she was a kid, but evidently hasn't learned the words yet. She flubbed the fourth line of the national anthem sung at the start of the Super Bowl. Should a singer do something like that to the Indian national anthem, she would have a dozen criminal cases filed against her in far flung courts ruled by attention-seeking magistrates.
We take our national symbols seriously. Three years ago, Sania Mirza was accused of insulting the national flag because she put her bare feet up while resting after a Hopman Cup match, and a photographer clicked a low angle shot that suggested the feet were in close proximity to an Indian flag placed on an adjoining table. This was enough for a criminal charge. 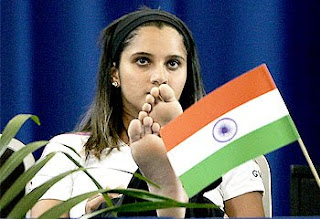 There's a folded khadi flag in a cupboard in our home, which used to be flown during Independence Day and Republic Day in the idealistic days of the 1950s. Somewhere down the line, the government forbade citizens from hoisting flags because of the potential insult to the nation, should they be flown upside down. It took a petition filed by Naveen Jindal and a Supreme Court verdict to reverse the idiotic policy, but those who inadvertently put the green above the saffron can expect to be hauled off to jail.
All of which makes a Borat-like performance impossible in India. I mean, a guy could pretend to sing the Kazakh national anthem to the tune of Jana Gana Mana at a public function, but once the film was released (abroad that is, it would be banned in India) PILs, extradition demands, and death threats would inevitably follow. Luckily there are places where expression is freer, and so we have Sacha Baron Cohen's fabulous mangling of the Star Spangled Banner to laugh at. The horse rearing and falling at the end of the sequence, which can be seen here, is an unexpected bonus. Like the bird flying to the centre of the frame and diving straight down into the water at the end of Barton Fink.
Posted by Girish Shahane Girish Shahane at 6:12 PM