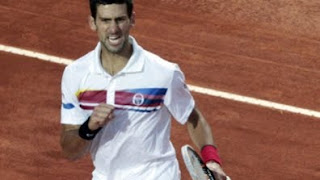 I can't remember the last time I watched a tennis match, outside of Grand Slams, that didn't involve Rafael Nadal playing Roger Federer. After years of those two dominating the game, there's finally somebody else to look out for. Last night I watched a tired Novak Djokovic summon up the strength to beat Nadal for the fourth successive time, and for the second time on clay, Nadal's favourite surface.
Djokovic's accomplishment eluded Roger Federer even at his best. That's because Federer's game has always had one slight weakness Nadal could exploit on clay. The Swiss master finds it difficult to hit high bouncing balls for winners from the baseline on his backhand. That chink in his armour was exploited for years by Nadal to get out of tough spots; anytime Federer seemed to be taking charge of a rally, Nadal would go deep to the backhand corner; he could hit the ball relatively slowly and gain the fraction of a second he needed to recover position, knowing Federer was unlikely to hit a clean winner in response. Djokovic nullified that tactic last evening, repeatedly climbing on high balls and crashing double handed backhands cross-court with tremendous power and accuracy.
The final was patchy, with phases of sublimity followed by some ordinary shot-making. I felt that Djokovic, exhausted from his semi-final win over Andy Murray, needed to close the match in two sets; had it gone to the decider, Nadal would've been the favourite. Despite squandering three match points, Djokovic pulled off an incredible win.
Posted by Girish Shahane Girish Shahane at 10:55 AM