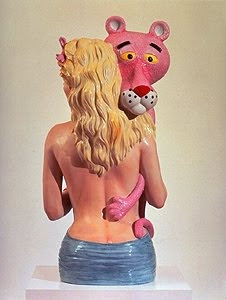 A news item about the Sotheby's sale of contemporary art last week read, "Jeff Koons' "Pink Panther" disappointed on Tuesday night at Sotheby's, falling about 15% short of its lowball estimate and selling for $16,882,500". You know you're living in a weird world when a porcelain figure of a Hollywood star embracing a cartoon character sells for over 16 million dollars, and yet disappoints the seller. 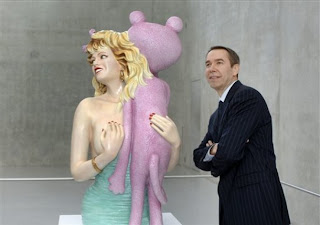 Pink Panther, created in 1988, first sold at auction in 1999, when it was acquired by the media tycoon Peter Brant for 1.8 million dollars. That was a record for Jeff Koons at the time, and you'd think a 900% mark-up in the 12 years since would seem impressive. Apparently not.

The man who shelled out nearly 17 million for the sculpture was an anonymous Asian telephone bidder.
Posted by Girish Shahane Girish Shahane at 9:56 AM

It would have to be "an anonymous Asian telephone bidder". I think HE will be a seller who will truly be disappointed in years to come. I wish.