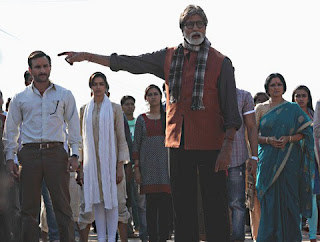 Aarakshan (spoiler warning) is two films in one. The first half is about quotas in education, caste rivalry, and the debate about what constitutes merit. The title suggests the entire film is about these things, but the title is misleading. By the interval, Saif Ali Khan is estranged from his girlfriend Deepika Padukone, their buddy Prateik Babbar has fought with both of them; Amitabh Bachchan has quarreled with his closest colleague, been removed from his job, and debated his wife to a stalemate; all because of the issue of caste-based reservations. There's even an attempt, a spectacularly unsuccessful one, to use affirmative action metaphors in a romantic song (Prasoon Joshi's words in Mauka outdo the most atrocious of Javed Akhtar's youth-brigade lyrics, the sort Akhtar wrote for the girl-band Viva). One wonders where Aarakshan could possibly go from here.
Prakash Jha's answer is to leave the reservation issue behind, and move on to the problem of mercenary tuition classes, capitation fees, and the collusion between educators and politicians. This shift rearranges loyalties, leaving all the good guys on one side of the divide and all the bad guys conspiring against them. The Amitabh character's response to the rise of high-fee coaching classes is to set up free special classes in a cattle-shed. His solution to the education sector's ills is obviously unworkable, resting as it does on the generosity of individual teachers and the munificence of charitable institutions. I suspect that paying teachers decent wages is more likely to promote quality education than asking them to teach for free. Despite the naive idealism of this answer, Aarakshan succeeds in tapping into the common feeling that something is rotten in the state of India's higher education, and the film can therefore present itself as offering an alternative to the evil status quo.
Anna Hazare's movement, it seems to me, works on the same basis. It eschews those things which fundamentally divide civil society, and instead taps into popular outrage against corruption in politics and daily life. Everybody is against corruption, just as everybody is for peace and harmony. The solution Hazare's movement offers in the form of the Jan Lokpal bill is as naive as Amitabh Bachchan's classroom-in-a-tabela. There have been a number of critiques of the proposed bill, but I'll link to just one, an article by Pratap Bhanu Mehta which contests both the methods and substance of the Lokpal agitation. The establishment of the Lokpal as envisaged by Hazare, Bedi, Kejriwal and the Bhushans, will do almost nothing to curb corruption; if set up in the form the activists want, it will only add a layer to India's bureaucracy, a layer which will soon turn as corrupt as all the other layers.

I recall another naive solution which united civil society a while ago. Shocked at images of hundreds of tonnes of foodgrains rotting while food prices soared, the Supreme Court asked the government to provide the grain free to the poor, not appreciating that the government could only do so through the public distribution system, and that it was precisely because of the shortcomings of the public procurement, storage and distribution system that so much food was rotting in the first place.

Aarakshan arrives at a happy ending through a deus ex machina (or a diva ex machina). Just when Amitabh's school-in-a-tabela faces being bulldozed, Hema Malini, chairperson of the trust that employed Bachchan as College Principal, returns from her decades' long spiritual retreat, and makes a call to the state's Chief Minister, who promptly orders the police and municipal employees to cease and desist. In other words, the good guys win because they can make a phone call to a higher authority than the bad guys; their most powerful person has more pull than the most powerful person among the villains. A quintessentially Indian conclusion.
Nobody in the audience blinks at the idea of police officers doing Ministers' bidding. That's just the way our system works. If the Home Minister says 'arrest', they will arrest, if the Chief Minister then says 'release', they will release.

Which is why officers who have provided investigating commissions with data that implicates Gujarat Chief Minister Narendra Modi and his colleagues in the horrific massacres of 2002 are being suspended and chargesheeted, while those who helped in the cover up have been consistently promoted. The subversion of the system is happening before our eyes. Yet, there is little outrage about it, certainly nothing to match the fervour generated by Anna Hazare's agitation. That's partly because so much time has elapsed since the Gujarat riots, and so much has been written about them, that people are sick and tired of the issue. But it's also because the 2002 riots, like the Mandal Commission report and the issue of reservation in general, divide society. Narendra Modi has been elected and re-elected despite his apparent complicity in mass murder. His supporters, in a Pavlovian response to criticism of their hero, parrot the 'What about the 1984 anti-Sikh riots' line whenever the 2002 massacres are brought up. In 1984, our systems were so crude and compromised that no proof could be found that X or Y led rioting mobs. The fact that the justice system failed then is hardly an excuse to allow it to fail again, as if each side is entitled to one pogrom free of charge. This time round, we possess call records, minutes of Cabinet meetings, videographed witness testimonies, and a wealth of other evidence aided by the introduction of new technology between 1984 and 2002. We have high ranking IPS officers willing to testify under oath that there was a government backed effort to generate anti-Muslim hysteria in Gujarat; government-sponsored demonstrations that were meant to turn violent; and government-mandated inaction on the part of the Gujarat police.

There are tough questions facing us: Can we bring a Bal Thackeray to justice? Can we bring a Narendra Modi to justice? What does it say about our commitment to the rule of law if we cannot? Though the questions are tough, they can be resolved through relatively simple procedures in place already. However, there is little pressure from the public to get those procedures right. I see few Facebook petitions relating to police officers victimised for telling the truth about horrific crimes. Like the issue of reservations in Aarakshan, the murders of 2002 seem best forgotten after an interval.

Superb, loved this. thank you Girish.

I welcome informed criticism, but I'm not interested in debating anonymous pro-Modi trolls. If you want a discussion, make sure you post under a real, verifiable name. Otherwise you're wasting your breath.

I have never had much regard for Prakash Jha's film making skills , it is all there to see in Rajneeti.. One half of the story is from Mahabharata and other half from Godfather and when someone can't make a half decent film story wise and adopts an issue of reservation, I wouldn't bother to see it. Our film makers falter in trying to make a serious subject as either they fail in understanding a problem ( hence a idealistic solution ) or they don't know where to take the film once they have established the theme. That's my two cents on it !!...Cheers Srikanth

Nice analogy. In Jan Lokpal Bill, as in the movie Aarakshan, people seek one-magic-bullet solutions. We opt for solutions that seem to make immediate impact (change); we either don't have the patience or cognizance for harder resolutions that target the core of the problem (e.g., big governance) - the impacts of which are not immediately felt.

Now that Anna has been declared the "winner", the demonstrators and supporters will go back to their home, feeling that they did something, relieved that the problem is solved - mission accomplished.

Hello, thanks for an excellent summation of an almost successful film and two ogres.

Talking about 'Arakshan', I agree with the strange split in the story but I felt the same way about 'Peepli Live'. Somehow, I was hoodwinked into believing that it was about the suffering farmers but it soon turns into this 'funny' satire on media. The farmers themselves come across as cliches, played a lot of times, for cheap laughs. 'Arakshan' makes for an interesting drama for just the fact I wanted to know what would the 'good guys' do get out of their troubles.