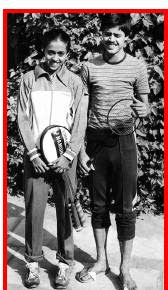 Syed Modi, who was born poor in a small town in Uttar Pradesh in 1962, broke free of his circumstances by excelling at badminton. He won the national championship at the age of eighteen, beating the great Prakash Padukone who was then at his peak. While junior national champion in 1978, Modi travelled to Beijing for an international tournament. A Bombay girl named Amita Kulkarni was in the women's team, and, as the Supreme Court would later record, "there arose intimacy between the two". Neither the Modis nor the Kulkarnis were thrilled with the idea of the North Indian Muslim boy marrying the upper-class Marathi girl, but the couple resisted family pressure, and wed six years later.
They had a daughter not long afterwards and, while Amita's badminton career was put on hold, Syed continued to rack up titles, winning his eighth consecutive national trophy in 1987. In July 1988, Modi was heading home after a practice session when he was shot dead on a street outside the K D Singh Babu stadium in Lucknow.
The UP police made little headway with the case, and the CBI was called in. They found an eye-witness who had not only seen the shooter but recognised him. They discovered that Amita Modi was having an affair with a state minister named Sanjay Singh, who was descended from the erstwhile royal family of Amethi. Sanjay Singh, in the CBI's view, had instructed a goon-politician named Akhilesh Singh to get Syed Modi killed. Four people were arrested for committing the murder, and Sanjay and Amita spent a small time behind bars. A few months after Modi's death, Sanjay Singh, who had a wife named Garima, married Amita Kulkarni-Modi. He didn't feel the need to hide the relationship, though it was the only imaginable motive behind the murder of a man whose friends described him as a mild guy with no enemies. By 1990, Sanjay Singh had left the Indian National Congress and was a central minister in V P Singh's new government (Sanjay and V P Singh were related). He later moved to the BJP and then back to the Congress. He's currently a Congress MP, but is showing signs of wanting to defect again. His wife, Amita Singh, just lost the election for the state assembly from Amethi, a stronghold of the Gandhi family dating back to the Indira Gandhi days.
It's obvious from this account that Sanjay and Amita were not convicted of plotting to murder Syed Modi. After making bold announcements of having cracked the case, the CBI began chasing its own tail instead of making any further headway. Last year, the former CBI Director Sumit Kumar Dutta published a memoir called Top Cop Recalls. He wrote, about the Syed Modi case: "One day, I received a telephone call from an officer close to the Cabinet Secretary that hearing for framing of the charge in the case was being preponed from the day already fixed for hearing and I should agree to it and not oppose the move. I said that it was not possible as our special counsel was in Mumbai and it was not possible for him to come earlier as there was no time for that.... next thing that came to my notice was that the Director was told to change our special counsel...".
Dutta and the then CBI Director Rajendar Shekhar resolved not to let political interference cloud the case. "He (Shekhar) told me that the Government wanted to know whether the Director would change the counsel. He wanted my views. I told him it was not possible in principle. He agreed with me. He asked me if I was prepared to put in my papers if the counsel was changed. I said ‘yes.’ He felt happy, as he too had decided to do so...Next thing that happened was something unheard of. All of a sudden, in the name of economy, the Government issued an order cancelling the appointments of all special counsels engaged by various departments to deal with their court cases. Therefore, our special counsel’s appointment was automatically terminated. All were surprised, but did not know the real reason."
When the Syed Modi case came to court, all the accused were let off, apart from the shooter identified by the eye-witness. Two acquitted underlings were soon found shot to death themselves. Needless to say, those murders have never been solved.
Sanjay Singh was in the news a few months ago, opposing his own party's decision to allow foreign investment in retail. Singh said the measure would hurt the poor, who are always foremost in his mind. Amita just gave an interview to NDTV speaking of how times have changed and dynasties like the Gandhis don't matter any more. The two will doubtless be welcomed into whichever party they decide to join next.
I've met taxi drivers from the Amethi region who speak of Sanjay Singh's power. Locals, they say, might be beaten for even looking him in the eye, men have to keep their head bowed in his presence. Syed Modi obviously got uppity, and paid the price.
Posted by Girish Shahane Girish Shahane at 5:29 PM

You've summed it well Girish. Guys like Sanjay Singh have shown that even the powerful Gandhis are powerless against them.

I wonder what the senior Kulkarnis must be reflecting in hindsight

Khalil, there were some letters from Amita's mother produced by the CBI that suggested the parents preferred the prince to the shuttler. I haven't got access to those leaked letters and no way of telling if they were genuine.

Maybe you should get together with your old friend Adrian and write it up as a crime novel.

Seana, I doubt the Singhs care about what I write. They've been acquitted, and there's no chance of them ever being held to account in the future. Besides, Lucknow is a long way from where I sit, literally and figuratively.

Not ever is a long time.

True. Those who believe in Providence or karma or the afterlife might be convinced of a reckoning to come.

Or that idea of the sins of the father being visited on the sons that comes up in the Bible.

One of the reasons behind the acquital was the spirited defence of the duo by their lawyer Ram Jethmalani. One of his contentions was that their relationship was more like a brother-sister one, this apart from the usual 'reasonable doubt' line of arguement.A year after the acquittal they got married. Years later watching Richard Gere's character in Chicago reminded me of the case and Mr. Jethamalani.

a badminton player who used to play with them told me that she was forced into the relationship with the htreats of murder to her near and dear. if thats true then her whole life from tht moment on is in the shadow of fear. Imagine if a man on the street is scared to look the villain in the eye then what chance does a simple sports person have in opposing the will of someone who changed the very system itself.

Clem, gosh, it's even more tragic if that's true. I've been going on about how far Bombay is from Lucknow and Amethi. Couldn't they have come away? Those letters and diary entries the CBI leaked aren't accessible online, but if I recall correctly, and presuming the CBI didn't make them up, they hinted at a romance rather than coercion.

i am from syed modi native village SARDAR NAGAR GORAKHPUR,THEY ARE FROM VERY SIMPLE FAMILY WHO THEY CANT AFFORD THSES TYPES OF PRESSURE.

Thanks Girish for the write up.
regards

It's a shame that criminal SanJay moving freely

Thanks for this post -I was looking out for some 'inside' stories on this matter for sometime now.. (and so because there was a quiz question I came across recently -'Name the Badminton player murdered in 1988...")


I was in school when Modi was murdered, but very much remember day-to-day media coverage on the matter after the murder..

Guys like Sanjay Singh need their own blood to counter them . In future I won't be surprised if he gets his son murdered.