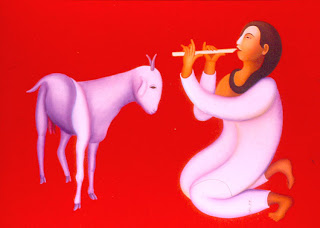 Manjit Bawa, who had been in a coma for three years following a stroke, died today. It is often said, not without justice, that he brought colour back to Indian painting.
Bawa began his career in India after a stint in London as a screen printer in the late 1960s. While he was in England, screen printing (also called silkscreen printing or serigraphy) was revolutionised by Andy Warhol's brightly-coloured portraits of iconic Americans like Marilyn Monroe and Jackie Kennedy. Bawa adopted the idea of depicting figures against a bright, flat background, and introduced a number of important variations to it. He worked with oils on canvas rather than serigraphs. He painted, for the most part, full figures floating in a field of colour. He chose vivid hues from Indian visual culture, whether miniatures or street signs. And he adapted myths and legends that told of the communion between humans, birds and beasts through the medium of music. A favourite theme was Krishna fascinating the animals of the forest with his virtuosity; another was the romance of Heer and the flute-playing Ranjha. Bawa's deep attachment to sufi mysticism and music led him to looked for harmony and gentleness in art where many of his peers focussed on violence and conflict.
Whether one liked Bawa's work or not was very much a matter of taste because he favoured colours which verged on the gaudy. He would defend himself against allegations of producing kitsch by pointing out that similar colours were found in universally admired miniatures. His argument ignored the fact that using a colour for flowers taking up a few square millimeters of paper has an entirely different impact from spreading the same shade over many square feet of canvas.
Leaving aside the issue of taste, his work began to feel repititious soon after he achieved critical and commercial recognition. He arrived at a mature style sometime in the late 1970s, and replicated it for over two decades with little variation. It appeared like a successful decorative formula, mass produced to satisfy his burgeoning client base.
Among the prominent artists whose work shows the influence of Bawa are Rekha Rodwittiya, Surendran Nair and Chintan Upadhyay. These younger painters have added a conceptual dimension which Bawa's canvases lack. In purely painterly terms, however, Bawa's output is undoubtedly superior to theirs.
Posted by Girish Shahane Girish Shahane at 5:23 PM