In March and April each year, Indian travel companies blanket newspapers with advertisements for European holidays. In winter, their focus shifts to warm lands like Egypt and Thailand. This year, though, a few firms have decided to plug Europe in December. Two ads pitching France caught my attention this morning. Both play up the romantic reputation of the country. Cox and Kings does it using a historical example.

The Eiffel Tower was built as part of the World's Fair of 1889 which marked the centenary of the French revolution, but calling it a symbol of the country's bloody revolution is a stretch, isn't it? Kuoni's full-pager pretends France is in the middle of easeful summer. 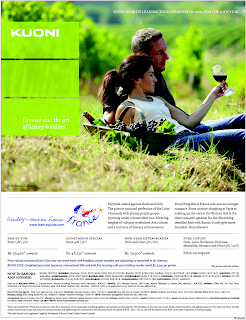 It uses a stock photo provided by the French government tourist agency, of a pretty couple relaxing on the heather, the man wearing a T-shirt, the woman a singlet. The copy speaks of "vineyards with plump, purple grapes ripening under the benevolent sun." A quick check tells me the sun isn't being particularly benevolent to Paris at the moment. The next ten days will see temperatures rise to a maximum of 5 degrees centigrade in the afternoon and sink to a minimum of minus 3 degrees at night. I called Kuoni to ask about the validity period of the Family Fun travel deal, and was told I could travel any time before March 31, excluding the Christmas-New Year period. Which means the choice for punters runs all the way from uncomfortably cold to bloody freezing.
Indians who haven't travelled abroad extensively have a misconception about seasons in the rest of the northern hemisphere. They don't realise that summer begins in earnest only in mid-June and lasts till the end of August. That's because those are the wet months in much of the subcontinent. For us, the warm season kicks off in late March, April is the start of high summer, and by May it's time to head for the hills. Or Europe, if you can afford it.
During my first year in England as a student, I expected to start feeling the weight of the sun's rays on my arms by mid-April. Instead, all I felt was the weight of a thick jacket on my shoulders.
Posted by Girish Shahane Girish Shahane at 1:13 PM