Reena Saini Kallat's show titled Silt of Seasons opened at Chemould Prescott Road on the 18th. It is a mix of previously exhibited and new works. In the latter group is a series concerned with the making of Mughal monuments, in particular the Taj Mahal. The artisans who worked on Mughal commissions frequently left emblems of their guilds on walls and flagstones. Reena has embossed these marks -- little fish, swastikas and the like -- on rubber stamps. The stamps make flat, wall-mounted panels, on which she has painted floral motifs reminiscent of the pietra dura decorations on the walls of the Taj. 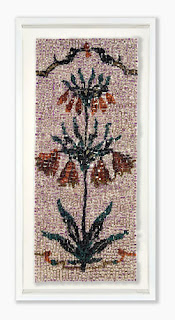 The idea is to focus on workers who created the monument rather than the emperor who commissioned it. From a distance we see only a botanical pattern, but once we get close-up we can identify the guild symbols. The problem is that the floral paintings aren't attractive at all. The image above, of a work titled Closet Quarries, demonstrates what I mean. It isn't a low resolution picture, that's the way the thing actually looks. Compare it with the gorgeous precision of the hard-stone inlay seen on the marble walls of the Taj, like this lily. 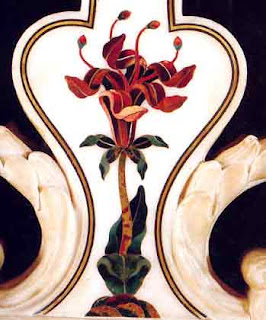 The best way to pay tribute to the artisans who decorated Mughal tombs would be to mirror some of their technical virtuosity. I realise it isn't easy to paint on rubber stamps, but surely part of an artist's job when s/he chooses an unusual medium is to master it. Reena has been working with stamps for a while now, and the images she has produced simply aren't as engaging as they need to be. The net result of the clumsiness evident in works like Closet Quarries is a failure to transmit adequately the underlying concept.
Posted by Girish Shahane Girish Shahane at 3:49 PM

Reena Kallit's intension was not to replicate the Tag Mahal in detail but to remind us that many human lives were dedicated to making this magnificent structure a reality. Using the stamps with various symbols that identified these magnificent artisans gives credit where credit is due.
I saw this piece in Mumbai and Reena's intentions are successful as art and a message. Carol Blake

I understand what her intentions were, Carol. In fact, what you say about her intent is in my post.