Since the terrorist attacks in Bombay, members of the public have been sending out mixed signals. During peace rallies held after the atrocity, quite a few angry citizens demanded the bombing of Pakistan. Percept Picture company seems to have hedged its bets with regard to audience mood. This ad for its new release Jumbo invites viewers to 'celebrate a non-violent Christmas' with loved ones.

A second ad for the same film sends a rather different message. 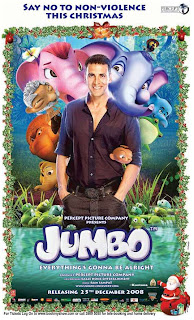