"Oh no". That was my first reaction on entering Hauser&Wirth's gallery in Old Bond Street and glimpsing Et Tu, Duchamp?, Subodh Gupta's larger-than-life-size bronze sculpture on a marble plinth. 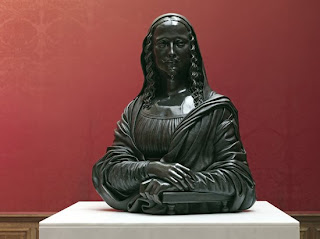 Back in 1919, Marcel Duchamp sketched a mustache and goatee on a cheap reproduction of Leonardo da Vinci's Mona Lisa. He subtitled this new artwork L.H.O.O.Q., a pun on 'Elle a chaud au cul', meaning, literally, "She has a hot ass". 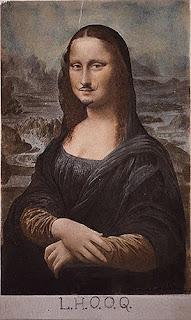 The self-consciously juvenile desecration of the image was part of the artist's questioning of the iconic status accorded to certain artworks.
By casting a monumental version of L.H.O.O.Q., Gupta signals that Duchamp has achieved the sacred reputation he appeared to decry. But Duchamp's art was always double-edged, too deeply ironic to be reducible to a manifesto of anti-art. He made miniaturised editions of his early output, and carefully supervised reproductions of lost works, evidence that he did not view them as throw-away jokes, and that he was not averse to a place in the artists' pantheon.
All this is well-established now. The question is: what has Gupta added to the discourse by creating Et Tu Duchamp?
For a while, I wondered if the Gurgaon-based artist, influenced by Rhonda Shearer's thesis that L.H.O.O.Q. merges Duchamp's self-portrait with La Gioconda, had created a sculpture that borrowed his own features. After looking closely, though, I concluded that the bearded woman's slightly masculine visage was an accident of the transfer to three-dimensions rather than an art historical intervention.
The inspirations behind Gupta's art tend to be very simple; he is instinctive and emotional rather than cerebral. This has served him excellently in the past, but a more intellectual approach was called for when he decided to cite fellow artists. The other such work in the show is Jeff The Koons, and consists of multiple casts of the box in which Koons' puppies are packed and dispatched. 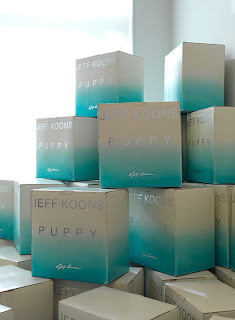 There's an echo of Warhol's Brillo boxes here, but little to keep one looking at the work beyond admiring the way frayed cardboard has been rendered in metal. The same question that sprang to my mind in the Ducamp room was accentuated by the Koons work: What is the point of this?
The point, if there is any, is that Subodh is trying to navigate away from his signature stainless steel pots and pans. There are stainless steel works in Hauser & Wirth's Piccadilly space, 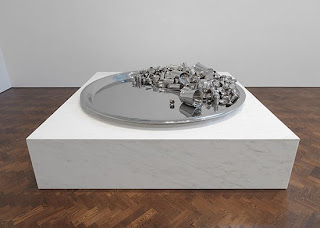 but the show as a whole takes off in far too many different directions. Apart from the Duchamp and Koons strand, there is an axe with a neon tube coiled around its handle; a fibreglass tree breaking through a wall; ; a series of Yves Kleinesque body prints of the artist's genitals, titled Master Bet (not the only bad pun in the show); casts of potatoes and mangoes; and fans with swastika blades. 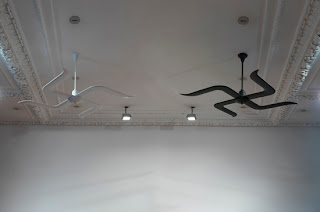 The black and white pairing indicates the two different meanings of the form: auspicious in India, a symbol of hatred in much of the world. The room with the ceiling fans also has two massive stainless steel spoons nestling on the floor below, and is the most elegant section of the exhibition.
The word 'transitional' kept coming up in conversations about Common Man (that's the show's title), but as one expert (who probably does not want to be named) pointed out, a major solo in one of the world's leading galleries is the worst possible time to produce transitional work.
Posted by Girish Shahane Girish Shahane at 10:14 AM

he may have stayed with his utensils, but when there is an advisory committee behind him deciding what he should create next, this was obviously to come.

completely agree with you. it was pedestrian - such a poor show; hope our art 'critics' will not try to blow hot air up our collective arses by raving about the emperor's new cloths.
what is it going to be next - LHOOQ shaved!!?

Vinod, if a committee had decided for him, I'm sure this is not what would have resulted. The moves Subodh made were bold, though I don't think they came off. Committees invariably make safe choices.

these are both bold and safe moves business wise, girish. whether or not they are so art wise is another matter.

If I had seen the Old Bond Street section first I wouldn't have gone on to the Piccadilly part...

"two massive stainless steel spoons...the most elegant section of the exhibition".... would have made a bigger statement if the exhibition was just this.

For someone who is a fan of SGs sculpture and thinks Hungry God should be permanently kept on the pontoon outside the Palazzo Grassi to say I was disappointed was putting it mildly. Especially when you just had every sense heightened so brilliantly across the road at the Royal Academy.

Girish, I am really fond of your blog.. you come up with really interesting research, articles and facts about Indian contemporary and modernist art!!!
I would like to connect with you
Regards