Jawahar and Edwina get 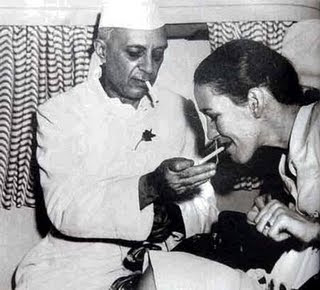 There's been speculation about why Quentin Tarantino chose to mis-spell the two words in the title Inglourious Basterds. I'm in the camp that believes it was a way to get past publishing regulations. Every newspaper in Bombay has carried large advertisements for the movie, which would've been impossible had the 'e' in 'Basterds' been an 'a'.
A couple of decades ago, the second collaboration between Stephen Frears and Hanif Kureishi was called Sammy and Rosie get laid. A number of newspapers, including the New York Times, refused to carry publicity material for it, until the producers opted for the toned down Sammy and Rosie.
The Brits didn't have as many problems with Sammy and Rosie getting laid as the Americans did. In Bombay, there was a screening at the British Council, for which Kureishi was present. The head of the Council, Clive Brasnett I think it was, mentioned the title in his introduction without a hint of a chuckle: "We are very pleased to have Hanif with us to present his film Sammy and Rosie Get Laid.." What annoyed the Brits in the audience that evening was the impression the film created that riots between whites and Asians were an everyday occurence. One rather worked-up man asked Kureishi during the session after the film, "Why do the characters have to shop in the bombed out supermarket the day after the riot? Couldn't they just go to the nearest intact one?" Kureishi looked abashed, and admitted the film probably exaggerated Britain's racial conflicts a tad.
As an aside, for any trivia buffs reading this, if you're asked, "In which film can you see Shashi Kapoor's bare butt?", the answer is not Siddharth or Heat and Dust, but Sammy and Rosie Get Laid. It is a Shashi Kapoor well past his prime, unfortunately.
Right now, our government is getting worked up over possible moral transgressions in the film Indian Summer, which concerns the relationship between Jawaharlal Nehru and Edwina Mountbatten, wife of India's last viceroy. Location shoots in India are imperative for a film like this, but the administration has put a spoke in the wheel by disallowing any intimacy between Nehru and Edwina. Even holding hands is beyond the pale, apparently. Deputed officials will ensure that everything is shot according to the approved script.
What the Delhi babus don't appear to have grasped is that sex generally takes place indoors, and location is irrelevant to an indoor shoot. What is to stop director Joe Wright (Atonement) from filming a Jawahar-Edwina romp in London after wrapping the location schedule? All we can do if that happens is to ban the film here, which will probably happen no matter how decorously the film depicts its central relationship.
Finally, another bit of unrelated trivia. The phrase 'Indian summer' has nothing to do with India. It refers to a period of warm weather that sometimes occurs in North America in late October. The confusion is all the fault of Columbus, of course.

Update, 23 October: The film shoot has been postponed because of an irreconcilable conflict between producers who want to focus on the Nehru-Edwina romance, and Indian authorities who are allergic to any hint of impropriety. I'm quite happy about the postponement, because the casting of Irrfan Khan as Nehru strikes me as disastrous.
Posted by Girish Shahane Girish Shahane at 9:15 AM

I was so amused to find this post come up in my google alert for Shashi Kapoor. I'm a hard-core Shashi fan and would definitely not have known the answer to your trivia! :)

Yaah.. Why Irfan of all people?.. But, who else? Who else in the current crop do you think will be suitable?