Thoughts on Frieze and the thawing market 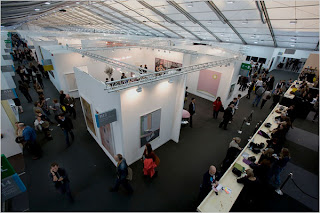 The dealers who had rented booths at the Frieze art fair this year played it safe. There were paintings, and more paintings, and yet more paintings. Damien Hirst, showing a suite of canvases elsewhere summed up the mood: "paintings are easier to shift – even in a recession people like paintings". Critics didn't like Hirst's paintings; in fact, it is fair to say they hated them, but I'll leave details of that show for another post.
Frieze is just seven years old, and still fairly small, but appears to have lost its edge. Maybe that is part of the process of growing up, but the link between the recession and conservative choices needs further consideration. Experimental art is supposed to be subversive, to question the established order, yet it flourishes most when the rich are awash with cash. Enron Corporation amassed one of the best collections of ultra-contemporary art in the years it was profiting from deregulation and scamming its way to near the top of the Fortune 500. Many of the financial geniuses who drove the world to the brink of bankruptcy last year are major art collectors. It's about time critics stop pretending that avant-garde-ish art serves some revolutionary political purpose (Indians are particularly prone to this belief).
The only Indian gallery featured at Frieze this year was Project 88, in the 'Frame' section reserved for new spaces. Sree Goswami showcased Sarnath Banerjee's amusing cartoons in her booth, and displayed a cute piece by Neha Choksi in the sculpture park nearby. Choksi's A Child's Grove was given a privileged position, between works by Louise Bourgeois and Paul McCarthy. According to news reports, a number of Sarnath's works were picked up for prices around USD 10,000 - 12,000 each, which is pretty good going.

There were few effects of the recession visible in London in the week I was there. The city seemed as busy as ever, all the restaurants and shops I visited were overflowing, and commuters in the Tube were more smartly dressed than I remember. Friends tell me that March and April were awful months, with 'To Let' signs on every second window and a doom-laden atmosphere. Obviously, a corner has been turned, though too late for Gordon Brown to survive as Prime Minister beyond next year's general election.

A year ago, it seemed that fundamental changes would be necessary to get the global financial house in order. Those hopes (or fears) have faded, and business as usual seems to be the order of the day. But what if the crisis does result in a long term restructuring of priorities in terms of consumption versus saving, and executive compensation? In the US thirty years ago, the average CEO of a large corporation received a wage about 50 times that of the average worker. If that seems high, consider that in 2007 the figure had changed drastically in favour of the rich: the average CEO earned more than 500 times as much as the average worker that year. A similar pattern played out elsewhere, and income inequality showed a significant rise in most regions of the world (It is worth mentioning that income inequality between regions declined in this period, due mainly to the development of China's economy). The growing wealth in the hands of very few was a crucial factor in fuelling the boom in art prices at the high end. If a situation were to arise in which the richest 10% earn a progressively smaller portion of total income, it will probably mean a long term recession in the art market.

Speaking of the Indian scene, I've heard that a couple of art funds are about to reach maturity, and are carrying a large stock of work. I've long believed that the substantial share of total purchases controlled by art funds in India will lead to a greater drop in this country relative to other markets because, unlike individual collectors who tend to hang on to works till prices turn upwards, funds with set redemption dates have to sell at whatever price they can get. Even as supply is constrained in mature markets, it will be unrestricted in India. Among readers of this blog, the very knowledgeable Torntash has suggested that funds will find arrangements outside of conventional direct sales to dispose off their assets. In a few weeks, we should have a hint of how successful such unconventional methods have been.
Posted by Girish Shahane Girish Shahane at 10:17 AM

welcome back girish,thanks for sharing your experiences with us. manish nai.

Would Torntash be willing to enlighten us with these"arrangements outside of conventional direct sales"?

The comments were made in response to an earlier market-related post: http://girishshahane.blogspot.com/2009/01/art-markets-blue-period.html

From what I've seen of the Hirst paintings it really made me wonder if DH isn't the great conman the more reactionary press take him to be. In the Picasso museum in Barcelona which is mostly his early stuff there's no question at all that Picasso can draw. I wonder if DH can? He used to boast that it was "amazing what you can do with an E in A Level Art", but these paintings really show me that he was actually quite lucky to get the E. I think DH has been fortunate that his early critics sounded like retired colonels who fume over The Daily Telegraph and The Daily Mail; I wonder now if his easy ride is over.