Of the two dozen or so shows, big and small, that I took in during my London stay, the most exhilarating was undoubtedly Anish Kapoor's mid-career retrospective at the Royal Academy. The artist presents visitors to Burlington House with an astonishing play of colour, texture and volume, from the gravity defying metal balloons in the courtyard, 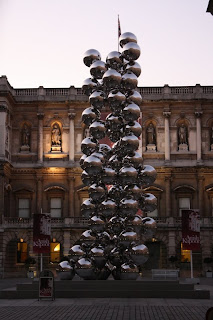 through the illusory optics of his signature mirrored stainless steel, to a room filled with coils of cement placed on wooden pallets, and another occupied by a rusted steel hull. 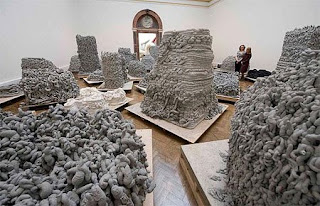 Among the newest works on view are two that use a mix of wax, red pigment and vaseline. Shooting Into a Corner consists of a cannon that is fired every twenty minutes after being loaded with a cylinder of compacted wax. 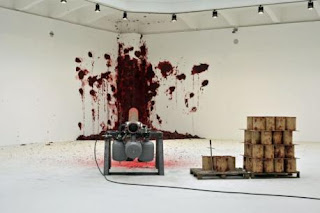 The second 'waxwork', titled Svayambh, is a 30-tonne red block on tracks, moving slowly up and down five rooms of the museum, slathering the arches and floor with goop as it goes. It is sculpture reinvented, occupying time as well as space, challenging the attention spans of room-a-minute viewers and rewarding the patience of those who stay through its journey. It is a train, a closing door, an eclipse, a phallus.
This last association is hinted at by the work's title, which calls to mind svayambhu (or self-generated) lingams worshipped in temples across India, and emphasised by the indentations created in the massive block by edges of columns in the Academy's arched doorways. 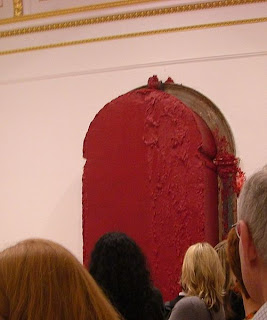 The incursion of the lingam within the negative space of classical arches inside one of Britain's most venerable institutions is an audacious postcolonial gesture, though one that has been entirely ignored by British critics. Svayambh has been displayed before in France and Germany, but it is as if those were just rehearsals for its proper staging at the Royal Academy.
It is unsurprising, perhaps, that the political associations of Svayambh and Shooting into a Corner have been overlooked, because Kapoor is not known as a political artist. Among the most frequently cited quotes by him is, "I have nothing to say". But he also stated, in the same interview and almost in the same breath, "I hate formalism, because formalism implies a death of the subject and the subject is the only reason to be an artist."
With Svayambh, it is as if Kapoor is consciously re-acknowledging the Indian side of him, a side manifest in his early work, later downplayed as he sought to evade the label of 'Indian artist', which can now emerge again in a manner that is not reductive.
Posted by Girish Shahane Girish Shahane at 10:10 AM

Girish this was a fantastic read. I am glad you enjoyed the exhibition. "Shooting into the Corner" has been extremely popular with all ages. If you would like to keep track of how that installation is progressing then you can view our live streaming webcam that will be up right until December 11th! http://bit.ly/hMZQ4

Svayambh is one of those stellar experiences in life within a gallery when you know you are witnessing something spectacular.

This show had such a binding experience on the viewers within the gallery...atleast when I was there people were just completely drawing themselves into every work and peering at strangers in the reflective ones, pointing out Pregnant to those who missed it, getting sucked up into that yellowness until the wall made you grin and say excuse me to each other, the kid next to me looked up after the cannon delivered a perfect red pancake and said "good shot!", a young girl helping an elderly woman navigate Grayman....mounds, and of course the movement of red wax and people from room to room. And all of us trying to take pics and being politely told we couldn't and trying again. And it was not a "fairground" experience but sheer exhilaration of people engaging with works and a wonder of knowing you are witnessing something really really special.

And I loved the anteroom of Shooting into the corner hugely. To see wax on the Royal Academy walls, on the elegant stucco work on the ceiling and splattered on the floor subtly displayed the confidence of an artist comfortable in his skin whatever label the critics wanted to tag on to him.

You're absolutely right, there was a carnival atmosphere in the place, because the art is so accessible, there are plenty of things that even children enjoy.