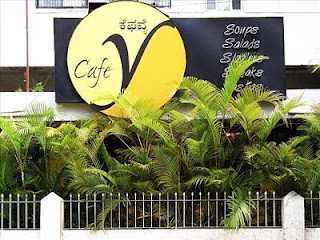 Went to Bangalore for a day. Flew Spice Jet, which was a mistake. I was told of a fifteen minute delay at check-in; we were cooped up in a bus for ten minutes without air conditioning or ventilation before being permitted to board; once aboard the captain extended the total delay time to an hour. After saying we'd be on the ground for another 40 minutes, he ended with, "Enjoy the flight".
The passengers in the back half of the airplane were headed to Calcutta. Why would anybody fly Bombay - Bangalore - Calcutta? Because it's a cheap fare, I guess. The Bangalore leg, though, was far from cheap. In fact, it was the most expensive flight that morning. The only one departing between 6.30 and 8 in the morning, unfortunately.
Bangalore's newish airport is about 50 kilometers from the city. My taxi's meter said 630 rupees at the end of the ride. That's a record for any trip I've taken in a taxi in India.
I wanted to try out a good new restaurant, but was forced by the delay to grab a meal at Cafe Y, the eatery closest to my destination. I'd heard about it, a hip place for youngsters to hang out, apparently.
The room was dark and warm when I entered. The only electrical appliances working were two light bulbs and two ceiling fans.
"No power, sir", the waiter smiled.
I chose to sit outside breathing diesel fumes from the generator.
Lasagne?
Sorry sir, no power.
Soup and garlic bread?
Sorry sir, no garlic bread, no power.
I settled for two dishes that could be prepared without recourse to an oven, toaster or microwave: seafood chowder and a plate of potato disks. I ate them feeling happy about the facilities in my home town. They haven't turned the lights out yet, that's one thing we can hold on to in Bombay.
Posted by Girish Shahane Girish Shahane at 10:51 AM

Hehe....In spite of the bad timing of incidents , I can't help but smile thinking this can happen only in our country!!! Hope you will have a better experience coming back....Srikanth

Very amusing as i too just spent a week in blr. Here's the deal : you dont take a taxi in blr if you can help it unless its a "city cab". You take a vayu vajra - they cover pretty much the whole city and the drivers are flexible enough to drop you off where you want on a road. there's generally an auto in the bus stand vicinity to hop into. as for blr hotels / restaurants : the first rule is to check for if they have a generator and only then look at hygiene and food issues. S Anand

Only one hour delay ??? Lucky you !!!
We all learn from our mistakes. Hopefully, you will have a better experience next time.S.Malavalli.

ahh...finally somebody who isnt scared of calling Bombay, Bombay.
I know it was Mumbai originally but now the name is reminiscent of the open Goonda "Raj" in the city...
sorry for the digression but I could'nt help it. I am so in love with Bombay. Bangalore is home now, sorry to hear that you didnt like what you saw so far. Take the bus next time, its excellent. Do make sure you try some North Karnataka meals and visit the Egg Factory+Sweet Chariot.

Reading this I was transported back to my three-day B’lore trip of 2008. My experience almost mirrored yours (barring the flight-related hassles). I too had a severe shock on beholding the taxi and auto fares. I remembered to get them reimbursed by the company the instant I returned!