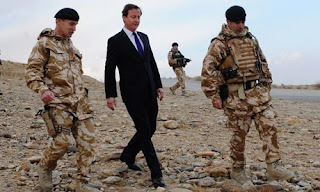 It's been amusing these past years to read continually of 'suprise' or 'unannounced' visits to Afghanistan and Iraq by foreign heads of state. The media never began to feel the redundancy of those words, even though ALL such visits were surprise and unannounced. The surprise, though, was apparently not surprising enough in David Cameron's case. His helicopter was almost brought down over Afghanistan during his visit to that country in June. Insurgents had got wind of his plan to visit troops in the Helmand province.
As it happened, Cameron also faced air problems during his next visit to this part of the world, a well publicised trip to India. A radar at New Delhi airport malfunctioned just as the UK Prime Minister's flight was due to land.
Lots of people are seeking signs of real progress in Iraq and Afghanistan. Well here's one to look out for: Barack Obama arrives in Baghdad or Kabul on a visit that's been announced weeks in advance. Don't hold your breath on that one.
Posted by Girish Shahane Girish Shahane at 1:55 PM

Your observations are excellent as always. Reminds me of a routine Robin Williams has:

What an odd picture. I wonder if it would possible to look any more out of place.