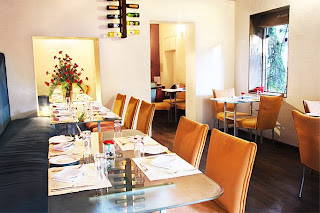 It's about a decade since Five opened on SV Road in Santa Cruz, and in those ten years I've eaten there about a dozen times and never been disappointed. It's one of the few restaurants in Bombay with real atmosphere, a great place for a quiet date or anniversary meal. A few meters away, Yoko's and Dynasty provide factory food to clients who can't get enough of it. Five, on the other hand, though much smaller, usually has tables vacant.
That wasn't the case when we dined there last night. The owners have placed two tables in the patio to augment the eight inside, and even these were occupied by the time we left. Being full, the restaurant was noisier than usual, but we could still converse with ease. My two companions had eaten late in the afternoon and decided to make do with soups and starters. We ordered celery soup, a catalan seafood soup, a seared mushroom, feta and spinach salad, cajun chicken, a braised lamb shank, an order of garlic bread, a Red Bull, a kiwi cranberry daiquiri and a sparkling melon cocktail. The bill, including taxes and service charge, came to just over two grand, which is pretty reasonable by Bombay standards, though obviously way out of reach of the 45% of Indians who earn less than 20 rupees a day (The mind boggles. 20 rupees a day. Surely there's a typo there).
In Bombay, red meat almost always comes from goats, but is called lamb in the fancier places. Since the lamb shank was fattier than goat meat usually is (I didn't mind, the fat was pretty flavourful, and the meat tender, almost falling off the bone), I made enquiries and was told the shank was sheep meat. I didn't ask if the sheep was less than a year old. The mushroom and feta salad came with spinach that had been perfectly sauteed in olive oil. It neither sat limp between cheese and fungus, nor was dry and greasy like the crispy stuff in Chinese restaurants. The Cajun Chicken was the lone letdown, being indistinguishable from Chicken Tikka.
Posted by Girish Shahane Girish Shahane at 9:00 AM

Oh good! Thanks for telling me about this restaurant. I didn't know it. Will try it out now, rather than going to Yoko's. :)

Do you have to call it cheese and fungus?

Didn't you and I have lunch at Five once, global? If I remember right you almost abandoned me and took a train home because my cellphone was off...
As for the fungus, would it be better if I wrote funghi?

Maybe this is one place I can try now. I have almost given up on restaurants in Mumbai. Last I went to was Mainland China in Andheri, they don't even serve in warm plates, take out the least chilled beer because it is more reachable. The Water chestnut and sweetcorn dumplings came split into two, so no steam to get converted to liquid as you bite into it. Lamb rolls looked like deep fried cigars with countable shreds of lamb(if it was really). The lotus leaf that wrapped the lotus rice had certainly been recycled. Broccoli, pokchoy and mushrooms in the wonton soup were staler than what you get at Godrej fresh.
Please put up some more restaurant reviews. Till then I'll eat what my Fatima Aunty from Hyderabad cooks.

who had the red bull? I thought only teens succumbed to the hype.

The other drinks contained kiwi and melon respectively... that should give you a clue as to who had the red bull :)