What happened to macho movie star? 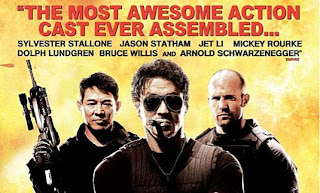 I saw a ridiculous film called The Expendables last evening. Such movies are saved, if they're saved at all, by the quality of the action scenes (which was not very high in this case) and the charisma of their stars. The stars of The Expendables were mainly fifty- and sixty-somethings, their faces warped and twisted by time, steroids, and an overdose of the good life. Sylvester Stallone, Mickey Rourke, Arnold Schwarzenegger, Dolph Lundgren, Jet Li (who's just short of 50, and doesn't have a warped and twisted face, but looks more like a banker than an action hero).
And I asked myself: what happened to the macho Hollywood star? Which actors today could carry a franchise like Rocky or Terminator? The last one was probably Vin Diesel, though he never became a megastar in the Stallone, Schwarzenegger and Bruce Willis category. This summer's blockbusters told a depressing tale. The star of two major franchises is a five foot six inch former coke addict called Robert Downey Junior. Now he's a fine actor, one of the best of his generation, and therefore manages to fit the roles of Iron Man and Sherlock Holmes, but macho he is not. The youngest of the stars of The Expendables is Jason Statham, who did a series called The Transporter. But he's a Brit. We had the Aussie Russell Crowe playing Robin Hood. Crowe had his macho moment in Gladiator a decade ago, and is now too fat and too old for the job, though, like Mickey Rourke and Robert Downey Junior, he's a good enough actor to seem almost right for it.
The top action star right now is Matt Damon thanks to the Bourne series; Matt Damon, remember, the pretty boy of Good Will Hunting, the cerebral, pacifist, left-winger. No wonder the producers of the biggest budget action flick of this summer, The Prince of Persia, felt the sensitive, brooding Jake Gyllenhaal could make the action hero cut. Next year, we'll have Ryan Reynolds playing the Green Lantern, which is going to be like Ben Affleck playing Daredevil.
Speaking of pretty boys in action films, one mustn't forget Orlando Bloom in Pirates of the Caribbean, alongside a fey Johny Depp. Keira Knightley was probably the most macho thing in those films. It's not surprising the makers of Salt, a role written for a male star, felt able to substitute him with Angelina Jolie in the spy thriller.
(While mourning the death of the macho star, I should add parenthetically that I much prefer the Bourne trilogy to the Rambo movies).
Posted by Girish Shahane Girish Shahane at 10:00 AM

Same feeling here. I felt that Sly must have had this thought that he would die soon and would never cherish the dream of seeing Arnie, Bruce and himself on screen for at least once and hence penned down this stupid film. Personally I have a high regard for Sly's earlier films , but this film seemed to satisfy his ego more than anything else. Bourne is my fav franchise too, where else would you find intelligence coupled with great action .....Srikanth

Orlando Bloom is such a wet blanket. I just cant watch him in anything.

Adrian, I missed Salt, but absolutely believe Jolie could carry it as well as Cruise.
Orlando Bloom had his big chance in Ridley Scott's Kingdom of Heaven to show he could be more than an elf. Through the movie he had me wishing Scott had gone with Russell Crowe; that would've made all the difference to the film.

I think it is because macho women are in Vogue these days: think Kick Ass, Salt and Girl With a Dragon Tattoo.

Naturally, if women are doing all the fighting and building all the muscles - men will have to take over the fey feminity. You know for the benefit of Yin & Yan.

Hahahaha....loved this post! I enjoyed the movie as well, though it's a leave-your-brains-at-home kind of flick. The cheese and bombast is the point!

I think the reason we don't have any full-blown testosterone-charged macho hero's anymore is simply because our tastes have evolved since the 80's and 90's. We'd rather have a foppish but witty Johnny Depp than a scowling one-dimensional Van Damme. Ryan Reynolds, Jason Statham, Hugh Jackman, Matt Damon, there's so much more to them and the films they do than the brawn. (I'm talking about Statham in Guy Ritchie's flicks)

Could another reason be that most of the people behind these action flicks are erstwhile comic book collecting geeks and gamer nerds (JJ Abrams, The Wachowski Brothers)?

Thanks, Shawn. I absolutely agree that it's been evolution in the right direction. Yet, I find myself feeling nostalgic for that T-Rex: the square jawed, muscle bound, ultraviolent action hero. I hated it when the film scene was dominated by those chaps, but wish there was at least one star in his thirties carrying on the tradition today.

Hi, came here via your latest Yahoo column. You’ve given me food for thought here. There really is no-one to fill in the shoes of Sly Stallone and Arnold and Bruce Willis. Perhaps Christian Bale is trying for that slot, with Batman and Terminator Salvation.

Possibly, but I've always thought of him as intellectual method actor. Apart from being the kid from Empire of the Sun, of course.

Another northern Brit. With painted-on abs in 300. But yes, closer than any of the others.

I never payed attention to that before. I guess you're right. On these days macho actors are being replaced by male models to play the role and the result is far from the same