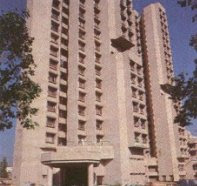 The first hotel I ever checked into and stayed in by myself was Delhi's Ashok Yatri Niwas (AYN). An Orwellian tower in a great location just off Janpath, Yatri Niwas was the government's budget option in the capital, a grade below Kanishka next door which was, in turn, cheaper than the five star Ashok in Chanakyapuri.
I was in Delhi in mid-December for a scholarship interview, and in those days was reluctant to stay with aunts and uncles who would gladly have provided more congenial accommodation. AYN had tiny rooms, cement beds, and lifts that took forever to get up and down its twenty or so floors. I couldn't ventilate the musty room because it was unbearably cold even with the windows shut. After spending a miserable night under a lone blanket, trying to breathe through a blocked nose, I woke to discover the Yatri Niwas promise of a hot morning shower was greatly exaggerated. It is possible veterans had used up the warm water before 7 am.
I wasn't in the best frame of mind on reaching the India International Centre, but the interview went well, and I was given the scholarship. That night I walked from AYN to the Central Telegraph Office on Janpath, which was one of the few places in the city offering long distance direct dialling facilities. I called home, and my girlfriend's home, and then celebrated with a fudge sundae at Nirula's, before trudging back shivering inside and out.
When I heard about AYN next, it was because a well-connected man had murdered his wife and burnt her body in the hotel's giant tandoor. This was not great publicity for the establishment, which found it hard to attract visitors even after changing its name to Indraprastha.
Two nights ago, I landed in Delhi at 11pm. I was on a work trip and had been told shortly before my plane took off that I'd be staying at the Ramada Plaza. We got there near midnight, but even at that late hour I was certain I was entering the building that once housed Ashok Yatri Niwas. The place has been tarted up in a baroque-Roman style -- fountain in the front yard, cherubs, marble columns, gilt decorations, Fragonard reproductions, statues of barely-clad women -- but the rooms are tiny as ever. I was surprised to see a flyer boasting the Ramada Plaza had won a best boutique hotel award. What does 'boutique hotel' mean if a 400 room, 20 floor joint run by a multi-national chain can be so described?
Posted by Girish Shahane Girish Shahane at 10:56 PM

well it's not cold this time around! Girish, will you be speaking in Delhi?

I'm back in Bombay, anon. I'm due to speak at a JNU conference next month, but nothing planned before that.

i have similar memories of the rail yatri nivas near the new delhi railway station - ajmeri gate side :). i am dying to get back to it in its new avtaar as Ginger.
and yes - did you get your hot water this time around?

It's amazing how popular Ashok Yatri Niwas was back in the day. A couple of friends I spoke to yesterday started with, "I, too, stayed at AYN" and proceeded to relate funny stories about it. I shouldn't be surprised, I guess, because the place was so large and there were no other reasonably priced hotels in the city centre.
The red oxide coating is spot on, SA.
Jaimit, I did get hot water at the Ramada. It poured down from a shower head the size of a dinner plate.