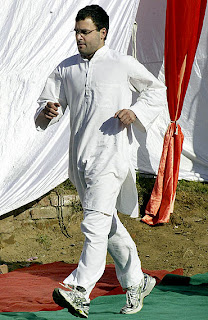 Suresh Kalmadi's definitely not going to survive as chair of the Commonwealth Games organising committee. So who can take over with just a few weeks left? My money's on Rahul Gandhi following in the footsteps of his father Rajiv, who helmed preparations for the Asian Games of 1982. Rajiv, of course, had two years in charge. With just two months to go, it's unlikely that even the clout of a Gandhi will make a huge difference.
Still, Dimples appears the natural choice. Alternate suggestions, anybody?
Posted by Girish Shahane Girish Shahane at 4:44 PM

Would probably sound weird but T. N. Seshan ( is he still alive? )

Good question, Srikanth. The reason I mention Rahul Gandhi is that, at this stage, you need somebody who can pick up the phone, order x to do y and be certain that his command will be carried out. That's the only way you can topple the entire Commonwealth Games organising hierarchy two months before the opening ceremony and still have a hope of conducting the games smoothly.
I certainly am not suggesting this because I hold Rahul Gandhi in high regard. I do not :)

Rahul Gandhi it should be. By the way Girish, it is easy to conclude from the aura around the Gandhis that they are very honest. It could just be Rahul G's sophistication; or the fact that he is in it all despite losing his father. Do you think that this perceived sense of uprightness about him is what works for him so well?

This is a super picture you found!

Meenakshi, I don't believe any of the Gandhis were / are honest, nor do I think Rahul Gandhi is sophisticated.
Jabeen, thanks, I try.

Hi Rahul Gandhi is a good choice. Nut what do ya think of his sister Priyanka Gandhi ?? I think she is just like Indira Gandhi, who has the power as well as intelligence. She can put a good end to these bad preparations.