The fate of INS Vikrant 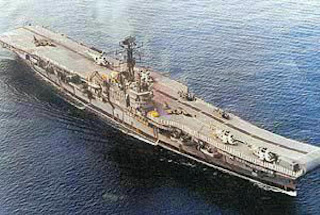 I am as fond of our first aircraft carrier as the next guy; in fact, I'm considerably fonder. As a child, I walked more than once along a dock, marvelling at the immense bulk of the steel grey ship. I stood on her deck watching in fascination as screaming planes landed one after another, each hooking onto a rope just in time to preempt what seemed a certain slide into the sea. I lunched in the captain's cabin, and grew familiar with the ship's multiple levels, clambering up and down ladders and through thick metal doors.
At school, when I played battleships, none of the destroyers, cruisers or frigates mattered to me; I cared only for the aircraft carrier. When the news came that INS Vikrant was being decommissioned, I took it personally, though I knew she was in poor condition. Built by the British to serve in the Second World War, and never launched because of that war's end, she was completed a decade and a half later to be sold to the Indian Navy. By the 1990s, she was good only for the scrapyard. I didn't support the plan to turn her into a floating museum because it takes a lot of finesse to turn the cramped space of a battleship into a public repository. Having seen the Navy's efforts at creating maritime museums in Navy Nagar and on an island off Apollo Bunder, and found both efforts wanting in interest and rigour, I knew the Vikrant museum would display none of that finesse. It did, however, open for a while, and received a regular stream of visitors.
The administration then decided it wanted the project to break even or make a profit. It invited bids from developers who could use part of the floor space for wedding receptions and other commercial activities. Today's Economic Times puts a positive spin on the enterprise, pointing to seven companies ready to undertake the makeover. Hindustan Times, on the other hand, focuses on cost escalation: Initially, consultants "estimated the project would cost 124 crore. Nine years since, the cost has more than quadrupled to 500 crore".
The idea of turning Vikrant into a floating mall typifies the blinkered vision of the people in charge of Bombay, who believe in wringing every possible paisa out of every available square foot of space in town. The only way an aircraft carrier can conceivably serve as a shopping arcade is if its entire interior is gutted and refashioned. If that happens, what will be left to preserve of historical worth?
Posted by Girish Shahane Girish Shahane at 9:05 AM

My father in law was the last FOMA commanding INS Vikrant. His name is Admiral Peter Debrass. Its sad taht the ship, epitomizes what India has become now, conspicious consumption at its best.

Sad indeed; I wonder what the current status is on the refurbishment plan.

I've been wanting to see for quite some time now even though i am more of an aircrafts guys.. is it still open for public display?