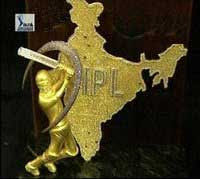 The IPL trophy, like most prestigious trophies designed in India, is expensive and ugly. 2500 diamonds, 4500 yellow sapphires, eight rubies, lots of gold leaf and the labour of 14 craftsmen went into the trophy's making, along with zero imagination and delicacy. Its main features are a map of India with IPL crudely spelled out in the centre, and a batsman alongside, diamond-studded bat clutched in hands at an incorrect angle for the shot he's playing.
Seeing the trophy on SET Max reminded me of the Jewels Museum in Tehran, which we visited a couple of weeks ago. The museum, which showcases the wealth of Iran's former rulers, is housed in the basement vault of a bank, viewable by the public every afternoon. There are probably more diamonds, emeralds, rubies, spinels and sapphires in that room that in any other of comparable size in the world. The only similar collection accessible to the public that I can think of is the British crown jewels in the Tower of London, but I believe that Tehran's museum is superior carat for carat.
The problem with the Tehran jewels is that, like the city in which they are kept, they fail to transform wealth into beauty. Diamonds are naturally attractive, of course, but one expects that, when combined with other, equally beautiful diamonds, they will form a piece that is more than the sum of its parts. That expectation is consistently disappointed in the Jewels Museum.
Tehran was a small town that boomed after it was nominated capital by the new Qajar rulers in the late eighteenth century. Asia, at that point in history, was a declining force compared to fast industrialising Europe. The rapid progress of the smaller continent left monarchs in the east doubting their own value systems and the foundations of their societies. The confusion spread to everything, from administration to art and architecture. As a result, Tehran's palaces and mosques compare poorly with those of Esfahan, which was the capital of the Safavids during the 16th and 17th centuries, and represents the confidence of a civilisation at its peak.
The Qajar rulers inherited the jewels of the Safavids and those acquired by Nader Shah when he plundered Delhi. There is even, in the Jewels Museum, something called the Peacock Throne, though it is not the bejewelled seat depicted in Mughal miniatures and removed to Persia by Nader Shah. Having taken charge of a vast store of gems, the Qajars clearly didn't know what to do with them, and resorted to a sort of diamond-stuffing competition. Artisans seem to have been under instructions to stick as many gems as humanly possible on each hilt, crown, globe and goblet. This is not a strategy calculated to produce breathtakingly beautiful works of art, and indeed, Qajar creations are no match for what one has seen of Mughal and Deccani jewelled objects. The latter consist of diamonds and rubies utilised judiciously, in combination with highly skilled carving, metalwork and embroidery. They are opulent, but rarely appear vulgar. Tehran's Jewels Museum, on the other hand, contains a number of vulgar artefacts, some almost as hideous as the IPL trophy, though that is setting the bar very high.
There is an interesting change visible in the Jewels Museum when we enter the era of Iran's last ruling dynasty, the Pehlavis. The crowns and cloaks are much more tasteful than those of the Qajars, but they represent a completely European approach. Created by the most famous jewellers of Paris and New York, they symbolise the radical western tilt of the last Shah, which proved too much for the public to handle, particularly because it came without the democracy prized in Europe and the US.
Posted by Girish Shahane Girish Shahane at 9:42 AM