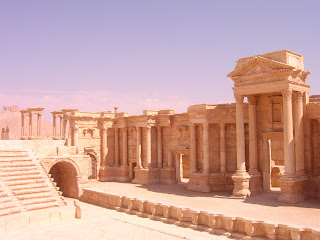 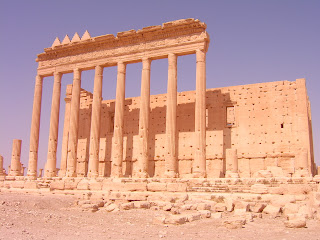 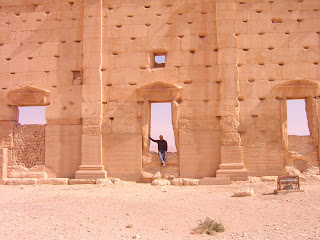 If Damascus didn’t quite match our expectations, Palymyra has exceeded them. Our original itinerary involved three ancient sites: Persepolis, Palmyra and Petra. Petra was thrown in doubt after the Jordanian embassy in Delhi said it would take at least twenty days to give us a visa, far longer than we could wait. We tried again in Syria, visiting the Jordanian embassy in Damascus the morning after landing, but were told pretty much the same thing: leave your passports here, come back after fifteen days and you may have approval, else it will take a month. Why not just put up a sign saying, “We don’t really want tourists”? By this time, we didn’t care overmuch: our trip so far has yielded such substantial pleasures, we will not return to India feeling we’ve lost out on anything.
We got to Palmyra late in the evening after a ride in which the bus driver played simultaneously a looped video on the monitor and his favourite music on a stereo. Having dropped our luggage at the hotel, we headed to the ruins. Most of the site is free and open to the public through the day; only the main temple and the theatre require tickets. Palmyra used to be an oasis town, a node in an important trade route. The spring has long since dried up, and the olive and palm trees that grow thickly beyond the ruins are now watered by a canal that has its source in a neighbouring town.
As soon as we walked past the first columns built back in the era when Christ was preaching, I knew this was the finest pile of classical stones we’d seen since visiting Ephesus a few years ago. The colonnades and temples are built of a stone that turns delicate pink in the light of the setting sun. Wandering among the pillars and archways, we were almost alone, barring a few fellow tourists, half a dozen camel riders and a peddler or three. That might seem like a lot of people, but Palmyra sprawls over many acres, leaving enough space for us to be by ourselves. I can’t think of any other major archeological site where one is allowed to wander unhindered even after darkness falls. Everything these days is cordoned off, leaving no doubt of its status as a tourist attraction. In Palmyra we could imagine more freely the kind of civilization that had built these imposing monuments.
This morning, the tourists were still thin on the ground when we got to the Temple of Bel. Palmyra is well connected with big towns that are two or three hours away by road, and many tourists prefer visiting on a long day trip. This is a mistake. If you ever come to Palmyra, make sure you stay a night or two. By the time the buses began pulling up we had got two hours to explore the place more fully. In the afternoon, we went to a couple of tombs close by, where the rich and their relatives were buried stacked in shelves four stories high. Then onto a fort that overlooks the ruins and provides a fine desert sunset. For dinner, we’ll head to the Zenobia hotel, a century old institution built within the grounds and offering a view of the colonnade. Life is good, even though President Assad the Second has made it tough to access Facebook and Blogger.
Posted by Girish Shahane Girish Shahane at 10:56 PM

Wow, this sounds like my kind of place. Just love ruins.I think Petra would have been plain overload in this already overloaded lost civilisations trip thus far!