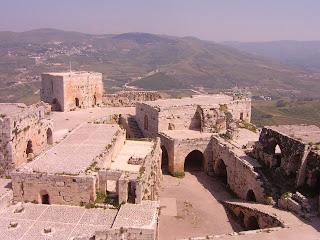 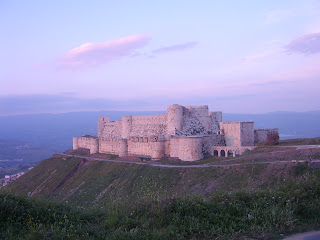 At noon on Saturday, we left Palmyra and headed west for Krac des Chevaliers, a castle built by Crusader knights almost a thousand years ago, and subsequently strengthened by Ottoman rulers. Our bus dropped us off at a city called Homs, and we shared a taxi up to the fortress with two Czech tourists who were also travelling from Palmyra. They intended spending a couple of hours looking round the fortress before heading on, wheras we had booked a room in a hotel on the hill across from Krac. The landscape around us changed now, becoming lush green. As we passed fields of heather and wild flowers, flocks of sheep grazing on hillsides, groves of olive trees, we realised we'd spent most of our vacation in the desert or close to it I responded to the altered scene by turning teary-eyed. Also itchy-eyed. And suffered a sneezing fit. It was time to pop an anti-histamine, although I knew it would half knock me out for the rest of the day.
On seeing the view from our balcony, we felt vindicated in choosing to stay at the site overnight. Krac Des Chevaliers is a perfect castle: compact, robust, well-preserved. We strolled across to it at 4.30 and spent an hour and a half exploring its lower sections. Like most sights in Syria, entry is expensive: 150 Syrian pounds per head, much the same amount in rupees. We were told we'd have to buy tickets anew when we returned the next morning. The wind had picked up by this time, and we were feeling cold despite having taken the precaution of wearing two shirts each. Some of the tourists there had dressed as if they were in a sub-tropical beach resort rather than on a hilltop in the temperate Levant, and they were suffering.
We had an early dinner at one of the two restaurants in the neighbourhood, because we didn't want to step out of our hotel once we got in.
The only thing on offer at both places was a set meal. Syria appears to have no mid-range restaurant options. You either eat a 50 rupee Shawarma or shell out 800 rupees for a lunch or dinner. If you have plenty of money to spare, it's a better place for foodies than Iran because each big city has dozens of restaurants; but if you want a reasonably priced sit-down lunch, you won't find one in this country.
It has also become clear why Syrians are so much fatter than Iranians. We ate a lot of meat in Iran, but it was always grilled or stewed, and accompanied by salads and whole wheat bread. In Syria most things are fried, and there are plenty of rich desserts to follow the meal. In Krac, we had some mezze, then greasy roast chicken accompanied by fried cauliflower, fried aubergine slices and french fries. Though we're climbing up and down hills and trekking through cities and ruins at the same rate as we did in Iran, we can feel our bellies beginning to bulge thanks to all the fat we're ingesting.
Sunday morning at Krac was warmer, stiller. We were, again, virtually by ourselves as we peeked into a Gothic chapel here, a storage vault there, then climbed to the high turrets. We checked out of the hotel at lunchtime and made our way to Aleppo, the final city on our itinerary, from where I'm writing this post thanks to a working wi-fi connection and the UltraSearch proxy favoured by Syrians wanting to visit nooks of cyberspace the authorities dislike.
Posted by Girish Shahane Girish Shahane at 11:53 PM

Remember reading Galbraiths account of Krak....getting exceedingly jealous... please stop these posts now. The Aleppo souk is meant to be " the oldest" intact souk in use each stall leading to stables behind. Nice?

First, thanks for the Airitis suggestion, it works pretty well. I didn't see stables behind each stall in the Aleppo souk. Just got back from that city this morning, and will post about it soon. Currently catching up on the stultifying political discussions on TV. Really glad I missed much of the tedium of the campaign.