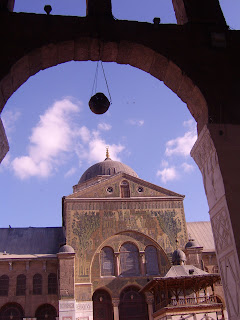 There is an immediate change visible around us as we move from the land of Khomenei and Khamenei to that of Assad and Assad. The people in Damascus are plumper, scruffier, almost slovenly in comparison with the clean-cut, well-dressed Iranians. Their speech lacks the sing-song gentleness, their manners the careful grace evident in Iran. There are children running wild everywhere: we saw hardly a single child alone on our earlier stop.
It is, of course, unfair to compare a country with one of the world's largest reserves of oil and gas with a neighbour that has very little of either commodity, but our minds cannot avoid making such unfair comparisons.
The oldest continually inhabited city in the world, Damascus used to be called. Now, more modestly, it is referred to as ONE of the oldest continually inhabited cities on earth, or the oldest inhabited CAPITAL city in the world. Coming after Esfahan, it doesn't seem great shakes at first sight: the mosques aren't as pretty and the products in the souqs as well-made. But the old town's history gradually draws you in. Here is the tomb of Salahuddin; here the road where Paul was baptised; here the spot where Imam Husain's head was brought and placed on display. If a mosque looks a bit like a church and the church like a Roman temple it is because Jupiter, Christ and Allah have been worshipped at the same spot at different times in history. In such circumstances, where one era overlays another without eliminating its visual presence, one ought not to expect harmony of design. If Iran was about the persistence and assertion of a clear identity, Syria is about confused identities.
Posted by Girish Shahane Girish Shahane at 11:40 PM

Which Main? What Cross? said...

Can't wait to read more about what you have to say about Damascus.