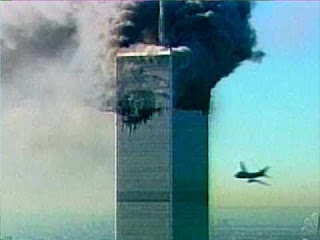 Until the financial meltdown of 2008, there was no event this decade that came anywhere close in significance to the September 11 attack on the World Trade Centres and the Pentagon. Perhaps no single incident in the history of humanity has had as much immediate coverage across the globe as the fall of the two towers. The sad truth is, though, that despite all that has been said and written in the past eight years, the vast majority of Americans know little about the motives of the hijackers.
I wish some news organisation in the US would conduct a poll in which the lone question was: "Name the primary grievance behind the terrorist attack of September 11, 2001." I'd be interested to know what percentage of the public gives the right reply: "The presence of American troops in Saudi Arabia". My guess is that less than one in ten Americans will do so, having been fed on a diet of, "They don't like our values", and "They want to take away our freedoms".
All but four of the hijackers were Saudi nationals. Al Qaeda, the umbrella organisation behind the assault, was formed largely as a response to the creation of US military bases in the oil rich nation. 'Crusader warriors controlling the Holy Land' was the spin given by Osama bin Laden and his acolytes to the agreement between the House of Bush and the House of Saud following the First Gulf War.
Two years after the 9/11 outrage, the United States withdrew its forces from the largest country in the middle east, shutting down bases built recently at massive cost. A handful of US personnel remain, but as trainers rather than combatants. In that narrow sense, Osama got exactly the outcome he was seeking when he and Khalid Shaikh Mohammed planned the operation.
Posted by Girish Shahane Girish Shahane at 9:23 AM

Methinks, they had found a great way to get attention - bomb buildings with planes. And would have settled for any reason for it.

They had a convenient one in US forces in Saudi. If not this, they might have objected to US forces in Kuwait - still there. If not that, to them being somewhere else - Philippines, Korea... Or maybe demand that all American "infidels" convert.

Don't think the reason really mattered. Or maybe deep down the real reason is - "They don't like our values / freedom." Laden & co just need somebody to hate.

And you back your claim by?

It is not a claim, it is a fact. You apparently believe the primary motivation of the hijackers was something else. If so, what was it? Do you, like Mr. Clueless, think those guys were just crazies looking for any reason to kill themselves and take thousands of people with them?

Whenever a fight erupts, after the first few seconds it not really the cause people are fighting for. It gets into ego, one upmanship, revenge etc etc...They then just last forever.. No one really might know why they are fighting... brothers, friends, neighbors, lovers, commuters… it’s the fight they are fighting for not the cause.
but ya, I think it started with the US forces in Saudi, which I think the Saudi’s themselves called in to protect them selves from Saddam, was it?

Watch all the episodes in The Power Of Nightmares and you will have a lot of your questions, misconceptions (for some comment'ers) answered. If not completely, at least to some degree Girish's post aligns with the facts presented in this documentary.
Link to Info
Link to Videos