The shack season in Goa 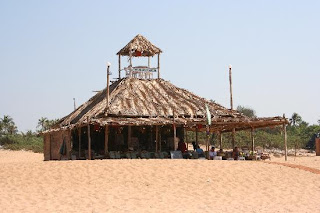 Goa's tourist season is still some way off, but a squabble's begun over a share of the spoils. It concerns shacks that come up along the state's beaches in winter. Back in the day, one or two could be found on each stretch of sand, but now they colonise every available square foot, and the number of prospective owners increases each year. The government handles the lucrative task of doling out permits.
The Shack Owners Welfare Society (SOWS, what could be more Goan?) is lobbying for old timers to be favoured, while the Goan Traditional Shack Owners Association, which appears to be traditional in the way the German Democratic Republic was democratic, wants a lottery to determine who will get space and where.
On the face of it, the demand for a lottery seems fair. The truth is, though, that most of TGTSOA's members have no interest in the restaurant business. All they want is to sublet the space to a non-Goan, making a tidy amount for doing nothing.
I spent a lot of time in Goa in my teens because my father was posted in Vasco, and that's when I discovered the state's beach shacks. The fish on offer was invariably fresh and cheap, and never smothered in heavy sauce. The quality of fare varied considerably, it has to be said. I recall one place in Anjuna that kept me waiting an entire hour before serving pomfret that was close to raw. But even that barely edible dish, and the lackadaisical attitude behind it, captured something of the spirit of the place that was screened out in fancy restaurants.
The last time I visited Goa, in 2007, Jabeen and I found the scene changed utterly, even from our own previous visits. Not only were there dozens of shacks to choose from, but they had much more elaborate decor and extensive menus. All minimalism had disappeared from the cooking, replaced by heavy, restaurant-style slop. Few of the waiters were locals: they came from UP, Bihar, even Nepal. The laid-back Goan pace had been replaced by frantic hard-sell. Perhaps worst of all, prices were now higher than in sit-down places on the main street.
It was still charming enough: I mean, how unpleasant can it be to sit sipping wine at a candle-lit table near the waterline with a breeze blowing landward? I knew, though, that the mood I'd experienced as a teen had died. If it was to be recaptured again, it would be on a beach in some other country which had yet to adjust fully to the demands and rewards of mass tourism.
Posted by Girish Shahane Girish Shahane at 6:49 PM