The Week in Art

I've been dawdling over my post about art events of the past week, because I'm not sure what to make of them. At one level it was an exciting few days. Two galleries opened, Gallery BMB on Monday and Volte on Friday; Mansi Bhatt's work at Chatterjee & Lal marked a return to form after two shows that had left me disappointed; and Inder Salim, a Delhi-based performance artist, brought his intriguing, postcard-sized pictures to The Loft in Parel. There's a very good piece on Salim by Deepanjana Pal here, and a first-person article of his practise by the man himself here.
The high season, it appears, has come early to Bombay, even as our second summer turns monsoon greens brown. A year after the meltdown it is as if nothing has changed. That, at least, was the impression left by BMB's lavish opening dinner at Indigo and its inaugural show featuring six artists from five continents (I'd have provided pics, except the gallery's website isn't fully up and running yet).
Tushar Jiwarajka's Volte will focus on experimental work: media art, performance and installation. He has already published a manifesto titled The Canvas is Dead. The most attention-grabbing part of Volte's first show took place at a distance from the gallery. A bus ferried visitors to the ruined Mukesh Mills compound where Mukul Deora had placed an old car and was handing out hammers to all who wished to help destroy the vehicle. 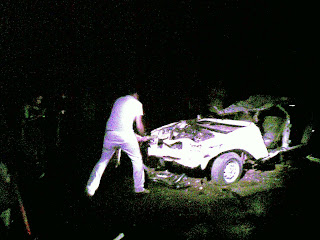 This kind of thing has been done before, but it was my first time participating. By the end of ninety minutes of car bashing, I'd developed a new respect for automotive technology in general, and the old Contessa in particular. The thing is built like a tank. I hear the totalled car will be transported to Volte where it might find a buyer willing to pay a much higher price than the working model would have fetched.
Posted by Girish Shahane Girish Shahane at 7:43 PM

Did you ever hear about JG Ballard's exhibition of crashed American cars in London in the early 70's. It sounds like your cup of tea. It's certainly mine.

Is Deora's pants hanging dangerously below his underwear?

No, Adrian, I hadn't. Will check. SN, sorry, it is a bit of a mumble, isn't it? Global, that isn't Mukul Deora in the pic. It's so dark, I'm amazed you can differentiate between the guy's underwear and his pants.

Mansi Bhatt's works i think are visually engaging, but when it comes to content, there's not much that the work conveys. it's more about the process of creation. why has she chosen those particular characters, or the material she has used for the various objects... if one wants to look for more in this set of works... there's not much to read. or was i reading too much... over-interpretation? is it?

I saw the work only briefly, and will go back, but as far as I know, she took photographs in her native village / town and then created mock-ups in a studio, playing the central characters herself.

yes but she said she randomly selected those characters/images from loads of pictures that she had clicked. the amalgamation of performance, photography and use of materials and space, is remarkable. also reminded of pushpamala's work.

Hey, thanks for the shout out. :) I saw pictures of you taking out your rage on that poor Contessa. Who'd have thunk you can be THAT violent!

It's a pain becoming part of an artwork when all one wants to do is smash up a car :)

Agree with Anonymous re Mansi Bhatt, but Pushpamala? No. Well produced, but as Anon says not much to read.